"The government of Afghanistan has made no commitment to free 5,000 Taliban prisoners." 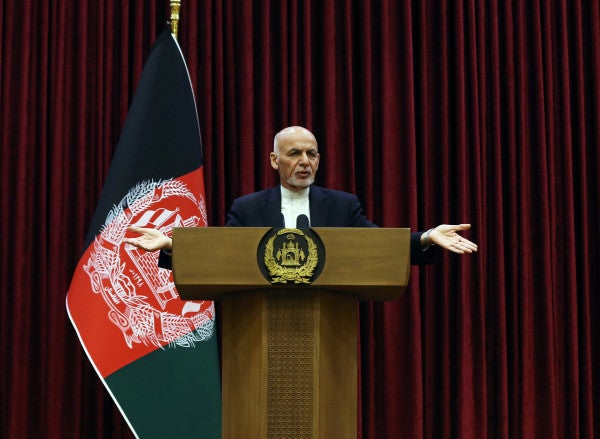 KABUL (Reuters) – Afghan President Ashraf Ghani rejected on Sunday a Taliban demand for the release of 5,000 prisoners as a condition for talks with Afghanistan's government and civilians – included in a deal between the United States and the Islamist militants.

“The government of Afghanistan has made no commitment to free 5,000 Taliban prisoners,” Ghani told reporters in Kabul, a day after the deal was signed in Qatar to start a political settlement aimed at ending the United States' longest war.

U.S. Secretary of State Mike Pompeo told CBS's “Face the Nation” program there had been prisoner releases from both sides in the past, and voiced hope that negotiations would begin in the coming days between the Afghan government and the Taliban.

“It's going to be rocky and bumpy,” Pompeo said. “No one is under any false illusion that this won't be a difficult conversation.”

Western diplomats see challenges ahead for U.S. negotiators as they shepherd negotiations between Ghani's government and the Taliban, who ruled Afghanistan from 1996 to 2001 and imposed many restrictions on women and activities deemed “un-Islamic”.

Under the accord, the United States and the Taliban are committed to work expeditiously to release combat and political prisoners as a confidence-building measure, with the coordination and approval of all relevant sides. The agreement calls for up to 5,000 jailed Taliban prisoners to be released in exchange for up to 1,000 Afghan government captives by March 10.

On the issue of the prisoner swap, Ghani said, “It is not in the authority of United States to decide, they are only a facilitator.”

Ghani told CNN on Sunday that U.S. President Donald Trump had not asked for the release of the prisoners and that the issue of prisoner releases should be discussed as part of a comprehensive peace deal. The political consensus needed for such a major step does not currently exist, Ghani said.

Ghani said key issues need to be discussed first including the Taliban's ties with Pakistan and other countries that had offered it sanctuary, its ties with what he called terrorist groups and drug cartels, and the place of Afghanistan's security forces and its civil administration.

“The people of Afghanistan need to believe that we've gone from war to peace, and not that the agreement will be either a Trojan horse or the beginning of a much worse phase of conflict,” Ghani added.

Ghani said verifiable mechanisms were needed to ensure commitments made are actually delivered.

The accord was signed on Saturday by U.S. special envoy Zalmay Khalilzad and Taliban political chief Mullah Abdul Ghani Baradar, witnessed by Pompeo.

After the ceremony, Baradar met foreign ministers from Norway, Turkey and Uzbekistan in Doha along with diplomats from Russia, Indonesia and neighboring nations, the Taliban said, a move that signaled the group's determination to secure international legitimacy.

Trump rejected criticism around the deal and said he would meet Taliban leaders in the near future.

Pompeo said Trump would be actively engaged in the process, but gave no date for a possible meeting with Taliban leaders.

Ghani's aides said Trump's decision to meet the Taliban could pose a challenge to Afghanistan's government at a time when the U.S. troop withdrawal becomes imminent.

Iran on Sunday dismissed the agreement as a pretext to legitimize the presence of U.S. troops in Afghanistan.

“The United States has no legal standing to sign a peace agreement or to determine the future of Afghanistan,” Iran's Foreign Ministry said in a statement reported by state media.

Under the agreement, the United States is committed to reducing the number of its troops in Afghanistan to 8,600 from 13,000 within 135 days of signing. It also is committed under the accord to work with allies to proportionally reduce the number of coalition forces in Afghanistan over that period, if the Taliban forces adhere to their security guarantees and ceasefire.

A full withdrawal of all U.S. and coalition forces would occur within 14 months, a joint statement said. The withdrawal depends on security guarantees by the Taliban.

After being ousted from power in 2001 in a U.S.-led invasion following the Sept. 11 attacks on the United States engineered by al Qaeda forces harbored by the Taliban, Taliban forces have led a violent insurgency. The Afghan war has been a stalemate for more than 18 years, with Taliban forces controlling or contesting more territory yet unable to capture and hold major urban centers.

(Additional reporting by Orooj Hakimi in Kabul, Gibran Peshimam in Islamabad, and Andrea Shalal in Washington; Writing by Rupam Jain; Editing by Ed Davies and Will Dunham)