How To Destroy Afghanistan: Establish An Army Of Private Contractors 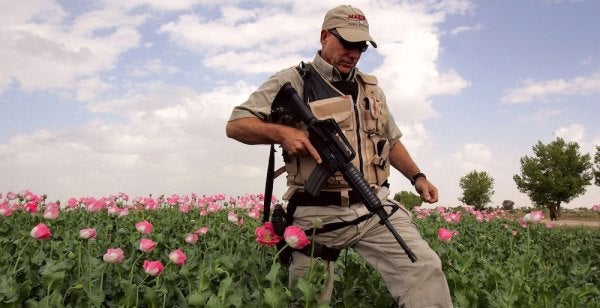 In recent weeks, two major players in the private security industry proposed that Trump administration officials privatize U.S. military operations in Afghanistan to an unprecedented degree. Erik Prince, former owner of the now-defunct firm Blackwater Worldwide, proposed a scheme that would entail the appointment of a viceroy to oversee operations in Afghanistan, and the use of “private military units” to fill in gaps left by departing U.S. troops. Meanwhile, Stephen Feinberg—owner of DynCorp International, which holds numerous major U.S. government security contracts at present—similarly proposed that the Trump administration privatize the military force in Afghanistan, though his conceptualization of such a force calls for it to be placed under CIA control.

Luckily, Defense Secretary Mattis reportedly has so far declined both offers. Research overwhelmingly indicates that replacing U.S. military personnel with contractors is not likely to be a militarily effective solution for the Afghanistan problem.

First, research has shown that security contractors tend to decrease military effectiveness when working alongside regular military units in large numbers, primarily due to coordination issues fed by convoluted command-and-control systems and resentment and misperception between the two types of forces. Coordination problems between the military and contractor forces lead contractors to have a negative impact on the military’s integration, responsiveness, and skill when the two groups are co-deployed in the field.

Second, while security contractors operating on their own—free from any alliance with an extensive force of friendly military troops—have been shown in some instances to increase operational effectiveness and achieve tactical and strategic goals, this has primarily occurred when they have been sent into an area without clear state support. In such cases, they can operate covertly and with “plausible deniability” for the state actor supporting them, which may allow for looser interpretations of the norms of international humanitarian law. In other words, contractors can be effective, but it may not always be pretty. Notably, current Department of Defense policy mandates compliance with standards of behavior may preclude such activities—but may also explicitly preclude some of what Prince is proposing.

Perhaps more relevant in this case is the fact that the tactical and strategic effectiveness of contractors who are operating without longer-term military support typically lasts only as long as the contract is in place. In Sierra Leone, in the late 1990s, paramilitary firm Executive Outcomes was successful in securing enough of the country to hold the first free elections in thirty years, but the peacefully-elected president was then ousted in a coup within eighty-nine days of the contract expiration.

Third, in a counterinsurgency effort such as Afghanistan, U.S. military policyfocuses on establishing legitimacy with local civilians. The use of armed contractors has been shown to be risky in this regard: a survey of 152 U.S. troops showed in 2007 that 20 percent of them had at times witnessed armed contractors performing unnecessarily threatening, arrogant or belligerent actions in Iraq. Similarly, nearly 50 percent of a sample of 782 surveyed State Department personnel who had experience working alongside armed contractors in Iraq showed in 2008 that armed contractors did not display an understanding of—or sensitivity to—Iraqi people and their culture.

Finally, there is the question of who would fulfill the contracts themselves. The Department of Defense already has a relatively large number of operational contractors working in Afghanistan (23,525 in total as of July 2017), and recent Department of Defense reporting indicates that contracted support requirements may increase based on pending troop-cap decisions. A small portion of that number (3,734) are security contractors and of those contractors, only 1,695 are armed and capable of paramilitary activity along the lines alluded to in the recent proposals by both Prince and Feinberg. From what labor pool, therefore, is the “private army” in question to be drawn?

Both recruitment and retention are critical here. At key points during the contracting surge in the early years of the Iraq War, private security company vetting and hiring standards varied and were at times relaxed in order to hire a large number of contractors quickly. A company’s recruitment policy could therefore affect the quality of the force.

Moreover, the labor pool for highly skilled contractors is limited, and both retention of such skilled personnel and their overall effectiveness could be hindered by deployment-related health effects: a 2013 study indicated that 25 percent of a large, multinational sample of contractors screened positive for post-traumatic stress disorder (PTSD), a rate higher than among civilians (6 percent have PTSD) or even U.S. service members (8–20 percent). Even more troubling, 23 percent of those who were deployed overseas at the time of the 2013 survey had probable PTSD, and most were not being treated for it. In contrast to the numerous mental-health resources available to members of the U.S. military, very few (if any) resources are available to help private contractors struggling with deployment-related mental health problems, and seeking help is highly stigmatized across this population. Research has found that untreated mental-health problems reduce productivity and attentiveness—setting the stage for decreased effectiveness and even the potential for harm in an operational environment if left untreated.

None of these research findings bode well for the long-term stability and security of Afghanistan if contractors are used to replace U.S. troops in the country. While operational contractors are now an entrenched part of the Department of Defense’s “total force” and are here to stay, large-scale privatization of the U.S. force in Afghanistan is unlikely to be effective.

Molly Dunigan is a senior political scientist and associate director of the Defense and Political Sciences Department at the nonprofit, nonpartisan RAND Corporation and a lecturer in Carnegie Mellon University's Institute for Politics and Strategy. This article originally appeared atThe National Interest.