Millions of Afghans will starve as Americans carve our Thanksgiving turkeys next month. By the time Christmas rolls around it may be too late to save them. 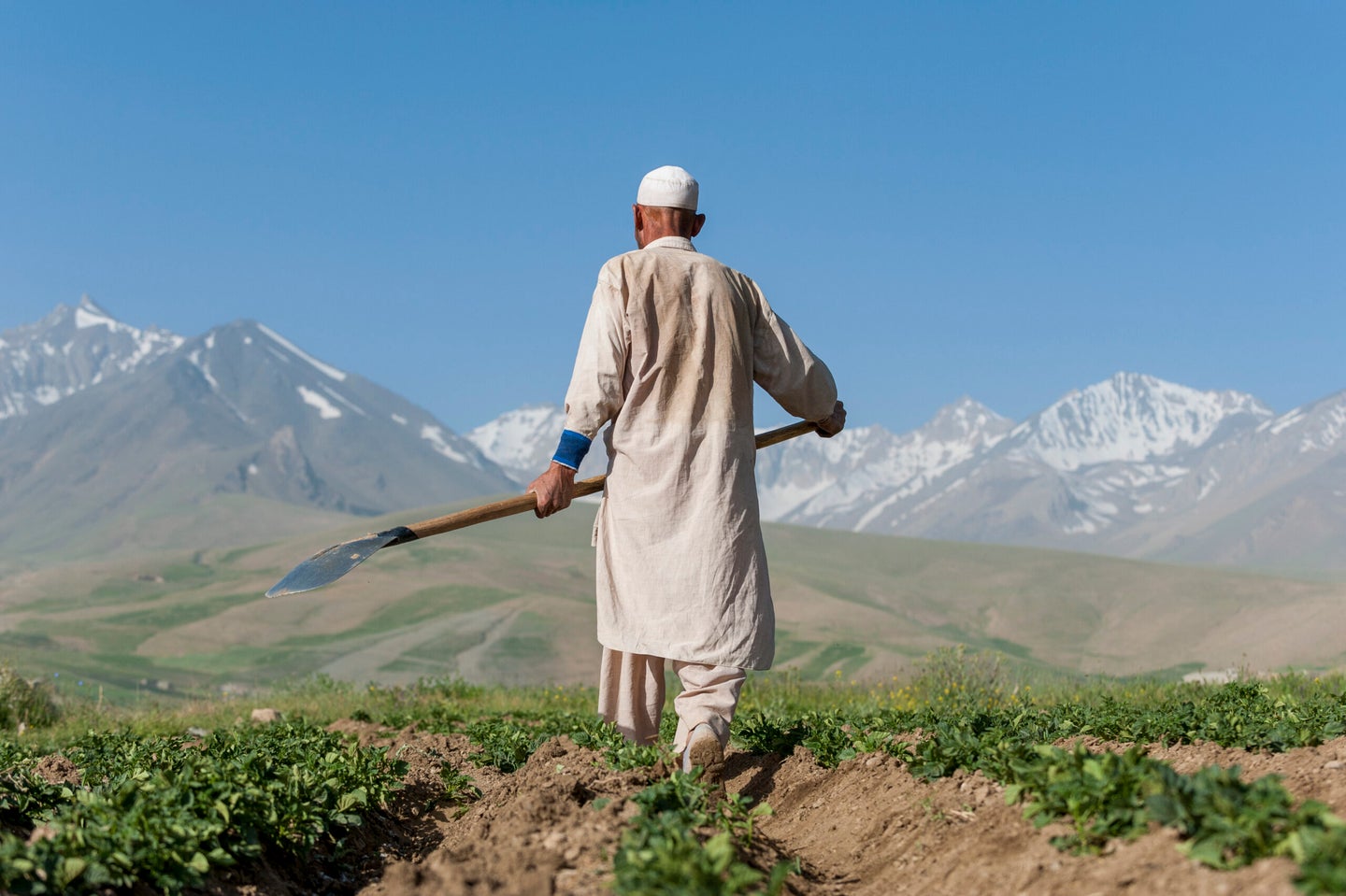 A potato farmer works in his fields in the Fulladi Valley with views of snow covered mountains in the distance. (Photo: Getty Images).
SHARE

Millions of Afghans will starve as Americans carve our Thanksgiving turkeys next month. By the time Christmas rolls around it may be too late to save them. Afghans are already running out of food just as the country’s brutal winter looms and the U.N. World Food Programme’s director for Afghanistan projected that its economy will collapse in a “matter of weeks.” Standing idly as millions of people succumb to cold and starvation in a country the United States occupied for two decades will permanently stain our nation’s character.

Some Americans may wince at the idea of sending more aid to Afghanistan as our own citizens struggle this holiday season. Didn’t we try that for twenty years only for the Afghans to squander it? Not exactly. Afghanistan became a black hole for American dollars precisely because aid was tied to a failing war effort. Congress had earmarked over $3 billion more for the Afghan military prior to its collapse in August— nearly equal to the grand total in humanitarian aid over the last two decades. Throwing more money at the problem of an unwinnable war became an easy answer for generals, lawmakers, and presidents alike. Much of it never reached the people who needed it most.

Two trillion hard-earned U.S. tax dollars fueled 20 years of war in Afghanistan. Our war in Afghanistan was a boon for ambitious generals, defense contractors, and corrupt Afghan elites. It made careers and paid for luxury homes in places like Dubai and McLean, Virginia. What’s left is a triumphant Taliban and a country of nearly 40 million people on the brink of starvation. The point of no return is just weeks away for Afghans caught between two decades of war and the brutalities of the Taliban regime. For some tragedy has already struck. Just recently eight orphaned Afghan children were found starved to death in Kabul. These images will become the norm soon if we do not act now. Will Americans cover their eyes as an entire generation of Afghans withers?

For some talking heads in Washington, the answer to that question is ‘yes’ for as long as the Taliban remain in power. They hope that crippling sanctions, low cash reserves, and economic pain will either force the Taliban to change their ways or inspire Afghans to overthrow them. These same assumptions underpin most U.S. sanctions in the world, the problem being that leaders almost always find a way to survive and sometimes even thrive under sanctions. It’s the people who suffer.

Presidents Trump and Biden both promised to bring an end to America’s forever wars starting with Afghanistan. President Biden also pledged though to continue to engage with the world through diplomacy. So far, he has reneged on this commitment beginning with the shuttering of the U.S. embassy in Kabul. China and Russia kept their embassies open after the Taliban takeover. The European Union expressed an intention to reopen its diplomatic mission within a month. The Chargé d’Affaires of the United Kingdom’s Mission to Afghanistan recently joined Prime Minister Boris Johnson’s representative to Afghanistan to meet with the Taliban in Kabul. The U.K. lost 457 personnel in Afghanistan and participated in some of the war’s fiercest fighting. Why have we now left our closest ally to talk to the Taliban alone? American leadership must mean more than just dropping bombs.

Washington can still avert a humanitarian disaster in Afghanistan. First, the Treasury Department should grant more expansive licenses which will exempt aid organizations from sanctions. The Biden administration should make it clear to NGOs that providing food and healthcare to Afghans will not put them in hot water with the United States. Second, Washington should focus humanitarian aid on Afghanistan’s health facilities. Lack of access to healthcare disproportionately affects women and Afghanistan’s medical clinics are one of the few settings where the Taliban have demonstrated some willingness to allow women to work. Third, the United States should continue funding Afghan schools while also calling on the Taliban to allow girls to access all levels of education. Salaries for individuals carrying out critical public services such as healthcare workers and teachers could potentially be made without going through the Taliban. Instead, they can be handled directly by institutions like the World Bank, UNICEF, or trustworthy non-governmental organizations with ground access. It is in the Taliban’s interest for these institutions to stay afloat regardless of who is paying for it and how.

Finally, the United States should begin to unconditionally release portions of Da Afghanistan Bank’s (Afghanistan Central Bank) $9.5 billion in frozen Afghan assets, much of which is held in the United States, and demand specific Taliban actions in exchange for releasing the rest. Providing humanitarian aid here and there without allowing money to flow into Afghanistan’s financial system will simply apply a feel-good bandaid to a bullet wound.

Ending America’s longest active war in Afghanistan ended a dysfunctional cycle of violence. Negotiating with the Taliban also conferred legitimacy on the group. This is why it is nothing short of cruel to now adopt a rigid approach to aid Afghanistan. Looking away does not change the reality that the Taliban is the country’s de facto government or that millions of Afghans are succumbing to starvation. Improved health indicators and infrastructure may be one of the few enduring positive legacies of the American service member’s sacrifice in Afghanistan. We should not throw it away.

Now is not the time to wipe our hands clean of Afghanistan. Talking to the Taliban won’t be easy or comfortable. Humanitarian aid sometimes does fall into the wrong hands. Helping the Afghan people will sometimes mean inadvertently helping the Taliban as their de facto government. But the only alternative is finger-pointing from the sidelines. That’s not the American way.

Adam Weinstein is a research fellow at the Quincy Institute and a former U.S. Marine who served in Afghanistan.