More Than 2,000 Paratroopers Deployed To Afghanistan On Short Notice

Fort Bragg is sending thousands of additional soldiers to Afghanistan to bolster U.S. forces in the nation’s longest war. Approximately... 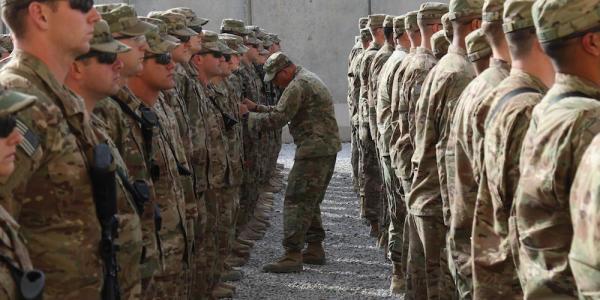 Fort Bragg is sending thousands of additional soldiers to Afghanistan to bolster U.S. forces in the nation’s longest war.

Approximately 2,200 82nd Airborne Division paratroopers began quietly deploying this month, part of a long-discussed troop surge that involves more than 3,000 U.S. service members on top of the more than 10,000 already serving in Afghanistan.

The local soldiers – part of the 1st Brigade Combat Team – were alerted to the mission earlier this month and quickly deployed. Once in Afghanistan, they will be reunited with their brigade leadership and about 1,500 soldiers from the brigade who deployed to Afghanistan earlier this year.

Those soldiers are spread throughout the country, from Bagram Airfield and Kabul to Kandahar and Helmand provinces.

They also have a variety of missions, tasked with training, advising and assisting Afghan partners and providing security for other U.S. forces in the country.

The commanding general of the 82nd Airborne Division, Maj. Gen. Erik Kurilla, said the latest deployments are an example of how the division’s paratroopers remain ready for whatever the nation asks.

“This past week, the remainder of our 1st Brigade Combat Team departed Fort Bragg to join their fellow Devil Brigade paratroopers already engaged in Operation Freedom's Sentinel in Afghanistan,” Kurilla said. “We were directed to provide additional forces in Afghanistan and, as always, we stand prepared to provide combat power on short notice while continually maintaining readiness for other contingencies should those emerge. We are the 82nd Airborne Division; this is who we are and the business we are in.”

The 82nd Airborne Division is part of the nation’s Global Response Force – which is tasked with deploying anywhere in the world on short notice. The division’s paratroopers also are often in high-demand by combatant commanders around the world.

The 82nd Airborne Division’s 2nd Brigade Combat Team returned from Iraq, Kuwait and Syria this week, following a nine-month deployment in support of the fight against the Islamic State.

The Falcon Brigade, 2nd Combat Brigade Team, 82nd Airborne Division, was welcomed home by friends and family after a successful nine month deployment in Iraq, Syria, and Kuwait in support of the Iraqi Security Forces.Photo via 82nd Airborne/Facebook

The 1st Brigade Combat Team, in addition to the paratroopers in Afghanistan, also has several hundred soldiers in Kosovo, deployed as part of a peacekeeping mission.

The 3rd Brigade Combat Team, which has soldiers training at the Joint Readiness Training Center at Fort Polk, Louisiana, is serving on the Global Response Force.

And the 82nd Combat Aviation Brigade has had soldiers deployed to South Korea and the Horn of Africa in the past year.

This month, the division also deployed several hundred paratroopers – most from the 82nd Airborne Division Sustainment Brigade – to Florida where they are part of Hurricane Irma relief efforts.

Kurilla said the division focuses on sustainable readiness to ensure its paratroopers are able to deploy rapidly when the nation calls.

That means working to avoid the peaks and valleys of readiness from past training models. Those models – fueled by regular deployments to Iraq and Afghanistan – would see units train up to reach peak readiness just before a deployment only to have that readiness plummet once the unit returned and soldiers began to leave for other units while newer troops replaced them.

“We can’t afford those kinds of cliffs and valleys in today’s uncertain environment,” Kurilla said. “Instead, we maintain a model whereby our paratroopers maintain a continuously high level of readiness.”

That means that even when a unit is deployed, paratroopers will rotate in and out of theater to attend professional development schools, transfer to new units or even retire. New paratroopers are brought into the organization through rear detachment units, rapidly trained and then sent into theater to join their fellow paratroopers.

“This model allows units to sustain readiness while deployed, and to return from deployment ready to immediately move on to the next mission as required,” Kurilla said.

Paratroopers assigned to the 82nd Airborne Division participate in the Airborne Review at Sicily Drop Zone, located on Fort Bragg, N.C., May 25, 2017.Photo via DoD

The general said his paratroopers are ready to deploy anywhere in the world in as little as 18 hours, no matter the threat or mission.

“But, more than just that, we are prepared to have multiple elements from the division deployed all while continuing to maintain readiness and preserving combat power for the long haul,” he said. “In an era of near-persistent conflict, this is what sustainable readiness must look like.”

“In an environment in which persistent, unpredictable threats loom, it is important to maintain this readiness model that allows us to counter those threats as they emerge,” Kurilla added.

While the latest deployments to Afghanistan came with short notice, they were not completely unexpected.

And when 1st Brigade soldiers deployed in June, Col. Tobin Magsig told the paratroopers remaining at Fort Bragg to be prepared. He said those not set to deploy would stand ready in case they were needed.

In addition to the 82nd Airborne Division paratroopers, Army officials in Alaska announced that an additional 1,000 soldiers there would also be deploying to Afghanistan.

Those soldiers are part of the 4th Brigade Combat Team, 25th Infantry Division. Originally, 1,200 paratroopers from the brigade were slated to deploy to Afghanistan, but the pending troop increase in Afghanistan increased that number to about 2,100 soldiers.

The 1st Brigade soldiers have deployed in small groups over more than a week.

On Sept. 13, nearly 150 paratroopers waited to deploy from a building at Pope Field. They said they had been eagerly awaiting the call that would send them to join their brigade in Afghanistan.

“Absolutely,” said 1st Lt. Mason Bell when asked if the soldiers were ready. “We’ve been waiting for the word since June.”

Bell and other soldiers from the 1st Battalion, 504th Parachute Infantry Regiment had said their goodbyes to families and friends earlier in the day. Now, with a huge American flag as a backdrop, they waited the last several hours before leaving for Afghanistan.

For the past several months, the soldiers had received several tentative dates for deployments. But nothing was ever final.

Then, last month, President Trump made a national address recommitting the United States to the 16-year-old war in Afghanistan.

“That’s when we kind of knew it would go down,” said 2nd Lt. Alexander Rodino.

The soldiers had about a week’s notice that they would deploy. They spent that time preparing themselves and their families for what is expected to be a six- or seven-month deployment.

Some, like Staff Sgt. Adam Watkins, will be returning to Afghanistan for the first time in years. Watkins last deployed to the country seven years ago. He said he’s eager to see what has changed in that time.

He said finally knowing that the unit is leaving was a relief to his family, who had dealt with a constant “will they or won’t they” for the past several months.

“We are finally here,” Watkins said. “That part is over.”

Bell said families were understanding of the mission.

“It’s mixed emotions,” he said. “They’re proud of us. But they’re worried, too.”

The soldiers expect to hit the ground running, they said.

“We train all the time,” Rodino said. “Very few of us get to go do what we train to do.”

“We’re excited,” added Bell. “We’re getting to join the others in our brigade. And we’re serving our country.”