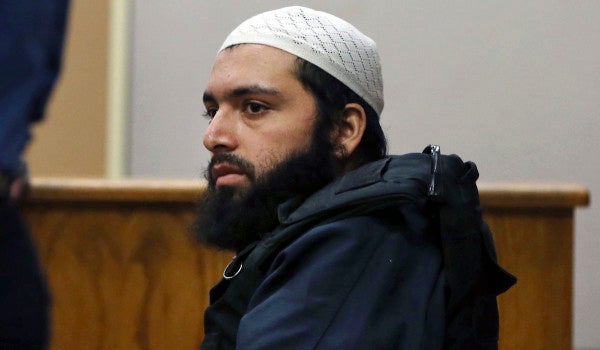 NEW YORK — A New Jersey jury convicted an Afghani immigrant of attempted murder Tuesday for a 2016 Garden State gunfight with police that left him bleeding and under arrest.

Defendant Ahmad Khan Rahimi sat silently after the guilty verdicts were delivered inside an Elizabeth, N.J., courthouse to end the jury's second day of deliberations.

The jury rejected the defense contention that the naturalized U.S. citizen acted in self-defense during the gunfight on the streets of Linden, N.J., as cops hunted the suspect in an earlier bombing in Manhattan's Chelsea neighborhood.

Thirty-one people were injured in the New York blast, and a second bomb set in the neighborhood by the Afghanistan native failed to detonate three years ago. The Chelsea bomb was packed with ball bearings and steel nuts intended to inflict maximum damage once the bomb detonated.

Prosecutors alleged that Rahimi also planted a small pipe bomb along the route of a Marine Corps road race down the Jersey Shore in Seaside Park. No one was injured by that device.

Rahimi was shot seven times in the gun battle with the Jersey cops as he went on the run after the two bombings, winding up the streets of Linden as he tried to avoid arrest.