An Air Force Academy cadet candidate once thought the victim of racial slurs at the preparatory school on campus was... 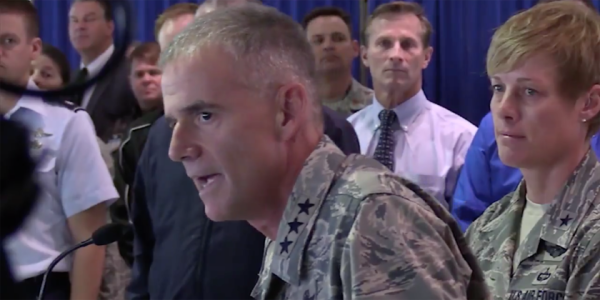 An Air Force Academy cadet candidate once thought the victim of racial slurs at the preparatory school on campus was actually the vandal who scrawled the threatening messages across the note boards outside his room and the dwellings of classmates.

The academy confirmed that finding Tuesday afternoon, and stood by a stern speech given by its top general in the wake of the incident. Lt. Gen. Jay Silveria gathered cadets and staff members for a speech that has gone viral in videos posted across the internet. He said that those who can't respect others “need to get out.”

“Regardless of the circumstances under which those words were written, they were written, and that deserved to be addressed,” Silveria said in a Tuesday email. “You can never over-emphasize the need for a culture of dignity and respect – and those who don't understand those concepts, aren't welcome here.”

The cadet candidate involved, whose name was not released, is no longer enrolled at the school.

In late September, five African-American cadet candidates at the prep school were targeted with a racial slur and the words “go home” on erasable note boards outside their room.

The incident kicked off a scandal at the school and led to a sweeping probe by academy police and the Air Force Office of Special Investigations.

“We can confirm that one of the cadet candidates who was allegedly targeted by racist remarks written outside of their dorm room was actually responsible for the act,” academy spokesman Lt. Col. Allen Herritage said in an email. “The individual admitted responsibility and this was validated by the investigation.”

Several sources say the cadet candidate, who hasn't been identified, committed the act in a bizarre bid to get out of trouble he faced at the school for other misconduct. The prep school offers a year of training for academy prospects who need academic help. The school is primarily used to fill athletic rosters for the academy's 37 NCAA teams.

Herritage wouldn't confirm the circumstances around the incident.

“We acknowledge that there may be additional information already in the public space, but we will refrain from discussing further details surrounding the investigation due to privacy act requirements,” he said.

No matter its origins, the incident sparked a national discussion on racism and the academy's swift and public response. Silveria was widely praised for his strong speech, with some suggesting he run for high office after he leaves the service.

The academy for the past 15 years has focused on programs that attempt to curb racism, gender discrimination, sexual assault in the ranks and religious bigotry.

“Racism has no place at the Academy, in any shape or form. We will continue to create a climate of dignity and respect for all, encourage ideas that do so, and hold those who fail to uphold these standards accountable,” Herritage said.

The racist incident was one of several woes to hit the school recently. Several players and coaches from the academy lacrosse team were suspended last month for unspecified misconduct.

Additionally, the school is investigating 13 freshmen accused of cheating on a test of basic military knowledge. The test includes simple questions, some asking cadets to recite quotes and name key military leaders.