An Air Force Academy cadet who kissed and groped an intoxicated, apparently sleeping female cadet without consent pleaded guilty Tuesday to one count of simple assault and two counts of assault consummated by a battery 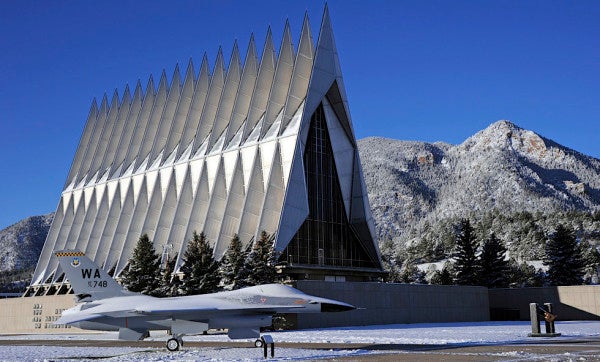 An Air Force Academy cadet who kissed and groped an intoxicated, apparently sleeping female cadet without consent pleaded guilty Tuesday to one count of simple assault and two counts of assault consummated by a battery.

Andrew S. Hong, who was entering his third year at the academy, was sentenced to eight months behind bars.

He also will forfeit pay and allowances and will be reprimanded and will be dismissed from the Air Force.

The assault occurred April 28, 2018, when Hong and a group of friends from the academy's Korean American community held a party at a house in Fort Collins, he testified. They were drinking, and the female cadet, whose name The Gazette is withholding, went to sleep after she became sick.

Hong said he later went to where she was sleeping and began to grope her, ultimately reaching to touch her genitalia before she stirred and pushed him away. He then spit alcohol into her mouth, causing her to cough violently.

The crimes to which Hong pleaded guilty are violations of Article 128 of the Uniform Code of Military Justice, which deals with assault.

“Cadet Hong will now have a federal conviction on his record,” the academy said in a news release.

Before Hong was sentenced, the victim read a statement, saying that he “completely betrayed my trust as one of my closest friends at USAFA.”

She said she hoped Hong's court-martial would help her deal with what had happened.

“His crimes have taken a negative toll on all aspects of my life and left me to further deal with self-hate and confusion,” she said. “After losing my friends, I felt alone and devastated and withdrew from everyone and everything around me.

“Mentally and emotionally drained, the semester after the event has been my worst semester at USAFA with academics and military aspects suffering, not being on any honors list for the first time. I am still in disbelief that this has happened to me and feel displaced in the Cadet Wing and with the Korean American community within.”

Hong's mother also addressed the court, pleading with Judge Matthew Talcott to have mercy on her son.

“After this incident, I've had a lot of time to talk to my son, so I know that he's very, very remorseful,” she said through a translator.

“I beg for your leniency and forgiveness so that he can recover from his mistake and become a positive person in the future and contribute to society.”

Hong also asked the judge to limit his confinement and apologized to the woman, who was sitting in the courtroom.