There’s a cheating scandal brewing at the Air Force Academy 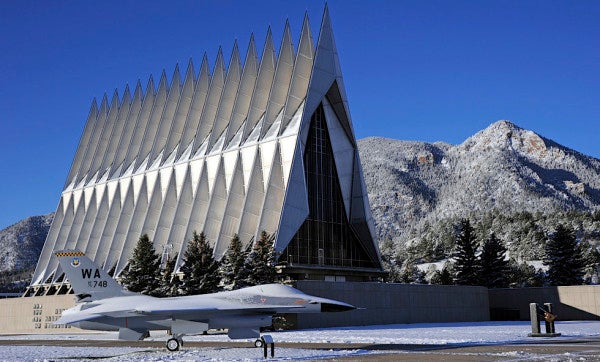 Suspicious results on the final exams of some Air Force Academy underclassmen triggered a probe that kicked off Wednesday to determine whether the cadets cheated.

The investigations, called a “clarification” process in academy lingo, are used to determine whether cadets violated the school's honor code, which forbids lying, cheating and stealing.

“When a faculty member has any concerns about cheating or plagiarism, it is immediately flagged and they conduct sessions known as 'clarifications' with cadets to address the concerns openly and to determine if there is a reasonable explanation. If not, the case is forwarded to the honor system, which determines whether a violation occurred.”

The academy wouldn't say how many cadets could be involved, or which classes resulted in the probe. One source familiar with the incident said the initial case involved scores of freshmen and their test results on a mathematics final.

“It is premature to offer an assessment of the scope of any cheating allegations or patterns among those allegations,” Bunko said. “We will provide an update as we learn more.”

Final exams are in full swing at the academy before the school's graduation rites next week. While many colleges have an academic honor code, none are quite as strict as the rules at the academy.

Cadets who lie, cheat, steal or tolerate scofflaws can be expelled from the school and asked to repay the government for the cost of their education.

Those incidents involved military training rather than full-on academics, making the latest probe something new.

If any of the cadets involved in this week's incident can't explain their suspicious answers, they have a couple of options. The first, and easiest, is to admit wrongdoing. Underclassmen cadets who voluntarily admit first-time honor code violations are placed under a rigorous sixth-month probation program but are allowed to stay in school.

Cadets also can confront their alleged violations before a cadet-run honor court system. The secretive hearings would be used to determine innocence or guilt, with a presumptive penalty of expulsion for those who are found to have broken the code.

“We have extraordinary expectations for our cadets to live their lives honorably and to engage in all their work according to the Cadet honor code,” Bunko said.

“Any violations of the honor code will be dealt with appropriately, to include honor sanctions and academic penalties.”