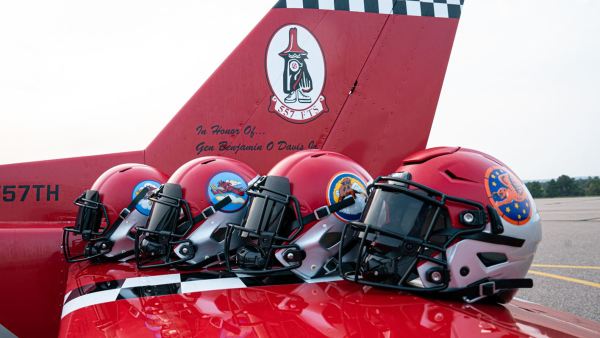 The Falcons' helmets for the game will be modeled after the tails of the P-51 Mustang aircraft flown by the Tuskegee Airmen, the first all-Black unit in the history of the Army Air Corps, the precursor to the U.S. Air Force. The Tuskegee Airmen, also known as the “Red Tails,” were credited with flying more than 15,000 individual sorties and shooting down 112 enemy planes during World War II.

The all-gray football uniforms will also feature unit insignia patches on the shoulders, plane stenciling and silhouettes of the Commander-in-Chief’s trophy on the legs, as well script “Red Tails” on each back nameplate. The shoulders, gloves and cleats will be decorated with the signature red and black colors of the Tuskegee Airmen.

As a member of the Mountain West Conference, Air Force has officially postponed the majority of its football season until the spring due to the COVID-19 pandemic (though that could change). However, the Falcons have committed to playing games vs. Navy and Army (Nov. 7) this fall as part of the Commander-in-Chief’s Trophy series.

The Tuskegee Airmen — commissioned in 1940 by President Franklin Roosevelt and trained primarily at Moton Field in Tuskegee — graduated more than 900 pilots, about 350 of whom served in active combat duty. The Air Force Academy Airfield is named for the late Gen. Benjamin O. Davis Jr., the commander of the Tuskegee Airmen.

The uniforms for the Air Force game vs. Navy are part of the “Air Power Legacy Uniform Series,” started in 2016 to honor Air Force’s history. Game-worn uniforms and helmets can be purchased on the Academy website, with proceeds supporting cadet-athletes.