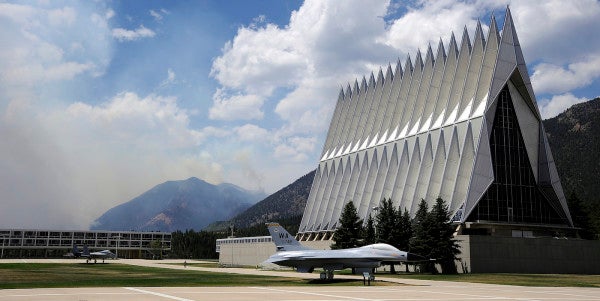 An image of nude children was spotted on Tech. Sgt. David Bingham's computer by his co-worker Staff Sgt. Barbara Hoerth after he turned the computer over to her for repair. At issue is whether Hoerth should have disclosed that she was working as an informant for the Air Force's Office of Special Investigations.

Defense attorney Capt. Jessica Delaney contended that Hoerth was acting as a government agent and a search warrant should have been obtained before she nosed around Bingham's hard drive, saying Air Force investigators “gave her specific direction” to spy on her academy comrades.

Prosecutor Capt. Susan Bet-Sayad said Hoerth was acting as a friend rather than a government spy.

“She was extremely surprised to find the contraband on the computer,” the prosecutor said.

The case dates back to 2016, when Hoerth called OSI agents about her discovery. They seized the computer and dug up other images detailed in court.

Judge Col. Donald Eller was bombarded with photos on the first day of the hearing, including images of Bingham's genitals.

Bingham, a physical therapist with the academy's 10th Air Base Wing, faces up to a decade behind bars in the case, He turned crimson at several points during Tuesday's hearing.

The allegation of OSI meddling in his case could see Bingham go free. If the sole image of child pornography involved in the charge against him is tossed as ill-gotten evidence, the prosecution would fall apart.

Eller, though, seemed disposed to the prosecution's view of Hoerth's role in the case.

“How is she any more of a government agent more than anyone else who wears a uniform,” the judge said.

Later, without issuing a final ruling, he said “let's say I deny the motion to suppress the computer,” possibly signaling that the prosecution's key evidence will survive.

The issue of confidential informants has been a big one at the academy in recent years. Former cadet Eric Thomas alleged he was kicked out of the academy in 2013 for disciplinary issues caused by his work as an undercover informant for the OSI. The academy later dismissed Thomas' claims.

The agency regularly recruits airmen to monitor their comrades. Hoerth was recruited after she went to agents seeking advice on whether she should join the agency.

While Hoerth was later sent in to confront Bingham while wearing a wire, OSI agent said her work for the agency was never a secret.

Depending on Eller's rulings on the motions, Bingham's trial could start Wednesday.