Four workers at the Air Force Academy's Sexual Assault Prevention and Response Office have been suspended amid a monthlong investigation... 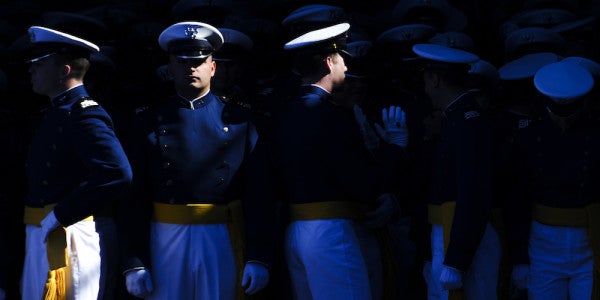 Four workers at the Air Force Academy's Sexual Assault Prevention and Response Office have been suspended amid a monthlong investigation that leaders of the school won't discuss.

Academy spokesman Lt. Col. Allen Herritage said undisclosed “issues” triggered a probe ordered by academy leaders. The investigation involves an academy office that school Superintendent Lt. Gen Michelle Johnson and others have held up as a national example for how colleges can care for sexual assault victims while educating students through prevention programs.

A source familiar with the investigation, but was not authorized to speak to the media, told The Gazette that four full-time staff members of the six-person office were suspended. The source said Johnson told academy leaders she had “lost faith” in the office's ability to care for victims. Herritage confirmed that an undisclosed number of staff members “are no longer performing” sexual assault prevention and response work.

A Pentagon report released in March showed that Air Force topped its sister schools in the number of reports of sexual assault from cadets, with 32 in the academic year that ended last June, down from 49 a year earlier. Army had 26 reports, up from 17 a year earlier, and Navy had 28 reports, up from 25 the previous year.

In the same report, the Air Force Academy's female cadets reported an increase in the prevalence of “unwanted sexual contact” last year, with 11.2 percent of them reporting unsolicited touching, up from 9.7 percent.

Johnson and other academy leaders have said the willingness of cadets to report sexual assault and harassment shows they have confidence in the system.

Herritage said despite the suspensions, the academy will have adequate resources to care for sexual assault victims.

“Taking care of victims is our top priority and we are ensuring we have the right personnel and protocols in place to provide the best care possible,” he wrote. “We are confident that there has been no degradation in victim care and support.”

The source familiar with the investigation said volunteer victim advocates, who undergo 40 hours of training for the role, are temporarily filling in for the suspended full-time staffers.

Before the suspensions, the office was rife with internal complaints. The source said workers filed grievances with the school's inspector general and asked for congressional inquiries over allegations of mismanagement.

“The office was very unstable and not managed well at all,” the source said.

Those allegations led to a “command-directed” investigation, which led to the sweeping suspensions.

The suspensions come at a key time for the office, which will soon kick off its annual training of freshman cadets. The class of 2021 arrived at the Air Force Academy for basic training Thursday, and sexual assault prevention courses for those cadets normally start within their first week at the school.

Herritage said the school has other resources to fill in for the suspended workers.

“The Sexual Assault Prevention and Response Office is just one part of the Air Force Academy's multi-pronged approach to taking care of victims and combating sexual assault,” he wrote.

“We have a comprehensive safety net of helping agencies for victim care that includes medical care, counseling, chaplains, peer support, law enforcement and a special victims' counsel —= a legal expert who is with them every step of the way.

“Leaders up and down the chain of command emphasize prevention through education and a healthy culture and climate.”

Under Johnson's four-year tenure, the general has repeatedly said the academy's sexual assault prevention and response efforts set a national example. In a community briefing earlier this year, Johnson said college leaders have sought advice from the academy to mold their own efforts. “About 3.5 percent of our cadets report something on the spectrum of harassment to assault has happened to them,” Johnson said in April. “At other college campuses, they think it's in the teens. But we cannot take comfort in comparisons because we expect perfection. We owe more to our nation.”

Johnson is set to retire in August, likely leaving a final decision on the suspended workers to her replacement, Maj. Gen. Jay Silveria.

The source said the Air Force revoked the workers' certifications that are required for helping sexual assault victims, and that they have been placed on “indefinite leave” while the academy figures out what to do next.