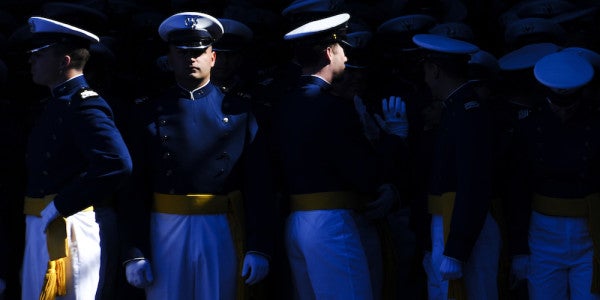 Prosecutors will add four counts against Armis Sunday, a junior at the school, alleging he sexually assaulted an intoxicated woman and took and distributed a cellphone photograph of her genitals.

“It must be emphasized that charges are merely accusations, and the accused is presumed innocent until proven guilty,” the academy said in a statement.

The initial charges against Sunday alleged he sexually assaulted a woman on the campus in April 2017 by groping her genitals without consent.

The new charges are tied to a Nov. 24, 2016, incident when he allegedly had sex with and photographed the intoxicated woman in Colorado Springs. Military law deems that drunken people can be found incapable of giving consent to sexual acts.

Prosecutors will lay out their evidence in the new case Tuesday in a courtroom at the academy’s Harmon Hall. A hearing officer will weigh the evidence and issue a recommendation on whether there’s sufficient proof to send the case to a court-martial.

Brig. Gen. Kristin Goodwin, the school’s commandant of cadets, will decide whether the case moves ahead.

The first charge against Sunday, a Texas native, carried a maximum prison term of five years. The new charges, combined, bring a maximum punishment of 40 years.

Sunday’s initial case was heard in July and sent to court-martial.

The new charges, if deemed sufficient, would be added to Sunday’s trial scheduled for January, academy officials said.