Air Force equipment manager Scott Richardson knew instantly on Sunday by the reaction on social media that the newly unveiled... 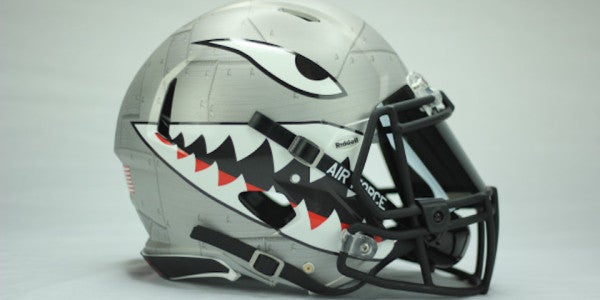 But he didn't grasp the extent of the reach until the next morning, when he saw the three hosts of Fox & Friends discussing it on their show.

“They were sitting around talking about helmets,” Richardson said. “That might be a first for Fox News.”

The helmet, designed to mimic the look made famous with paintings on the noses of the P-40s flown in World War II by the “Flying Tigers,” also made appearances on ABC News, ESPN and was a sensation on social media, drawing 250,000 imprints on Instagram, Facebook and Twitter just from the posts generated by Air Force.

Are you ready?! Here it it the AIRPOWER Legacy Series Sharktooth helmet. It will be worn vs @GeorgiaStateFB#LetsFlypic.twitter.com/73BpxRCqSP

Richardson, who spearheaded the helmet idea along with director of video operations Chris Miller, worried that the Air Force fan base that leans toward the traditional look might take issue with the unique design. But those fears quickly subsided when the reactions started flooding social media and their telephones. Richardson has already fielded calls from airmen stationed in Africa and Guantanamo Bay, voicing their approval.

The players certainly seemed to approve.

“I heard today that it went viral,” receiver Cody Bronkar said. “It's a big thing. It's cool. We're excited for that game, for sure.”

Added tight end Ryan Reffitt, “I love them. I had all my friends texting me, saying, “Those are sweet.'”

Coach Troy Calhoun praised the work of Richardson and Miller on the project and said he appreciates the numerous historical ties to World War II and those still flying A-10s.

But he wasn't totally sold on the idea.

“I like bolts,” Calhoun said, referring to Air Force's standard helmet look. “But they put together an exceptional design. Yet it won't help us block and tackle on a single play.”

The plan remains to wear the helmets and special uniforms only for the Sept. 10 game against Georgia State, which will be held on alumni weekend. The look could make a repeat appearance at some point.

The idea for the helmets and uniforms formed the genesis for a larger plan that Air Force athletics is calling the Airpower Legacy Series. The plan is to feature a different aircraft over the next five years. As of now, F-16s will be next, with F-35s and C-17s among those tentatively planned for future looks.

While Air Force came up with the idea – beginning early in the year – the implementation was handled by Hydro Graphics Inc. and Riddell. Hydro Graphics has been responsible for many of the looks that Oregon has sported in recent years.

The hockey, wrestling and volleyball teams will also do a take on the shark-tooth look.

Richardson's goal was to create something cool, and that would meet the approval of members of the Air Force.

Judging by the crazed reactions so far, he feels the helmet nailed it.

“If it helps get eyeballs to our games or gets people to what we're doing and what our coaches go out and have to sell to recruits, then that helps,” Richardson said. “At the end of the day, it's just cool.”