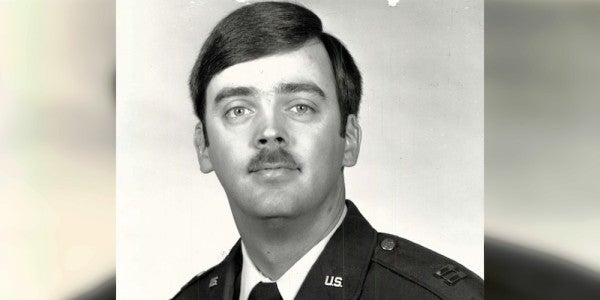 That officer, Capt. William Howard Hughes Jr., was apprehended in California on Wednesday, more than 30 years after his mysterious disappearance.

According to the Air Force Office of Special Investigations (AFOSI), the State Department was recently investigating a man claiming to be “Barry O’Beirne” during a passport fraud inquiry.

“After being confronted with inconsistencies about his identity, the individual admitted his true name was William Howard Hughes Jr., and that he deserted from the U.S. Air Force in 1983,” an AFOSI news release reads.

Hughes, now 66, told investigators that he was “depressed” about his Air Force career, so he assumed the fictitious identity of O’Beirne and had been living in California ever since.

But AFOSI spokeswoman Linda Card said there are many more questions to be answered as the investigation continues.

At the time of his disappearance in 1983, Hughes, then 31, was assigned to the Kirtland-based Air Force Operation Test and Evaluation Center. He had been at Kirtland since 1981, working on highly classified operations involving NATO’s command, control and communications surveillance systems, according to the news release.

He had top secret clearance, but “none that could compromise national security,” Pentagon officials said in article that appeared in the Journal on May 2, 1984.

Hughes was assigned to temporary duty in the Netherlands, working with NATO to test its new Airborne Warning and Control System, designed to be used for surveillance, command and control, battlespace management and communications. He was expected to return to duty at Kirtland on Aug. 1, 1983.

He never showed up.

His car was found at the Albuquerque airport and a search of his home in the 1900 block of Chandelle Loop NE revealed notes of planned activities and books to read upon his return, according to reports.

Hughes was seen in the Albuquerque area withdrawing more than $28,000 from bank accounts, according to the AFOSI news release.

After the Air Force formally declared Hughes a deserter in December 1983, his family said in an Associated Press article printed in the Journal on Jan. 20, 1984, they believed he had been abducted.

Hughes was unmarried when he disappeared, but the Seattle native had three sisters.

“We do not feel he disappeared voluntarily,” his sister, Christine Hughes, said in the article.

There was even speculation that Hughes may have been abducted by or defected to the Soviets.

In 1986, three years after his disappearance, journalist Tad Szulc wrote a piece published in the Los Angeles Times that referred to Hughes’ “apparent defection” to the Soviet Union.

Szulc’s article came amid suspicions that the Challenger disaster and explosion of a French rocket may have been due to Soviet sabotage.

“He is worth his weight in gold to the Russians in terms of future ‘Star Wars,’ if we have them,” Szulc quotes an unidentified intelligence officer as telling him.

But Card said no classified information leaks are suspected, nor is there an indication that Hughes was involved with the Soviet Union, but the investigation is ongoing.

Card said Hughes’ family has been notified of his apprehension, but it is unknown whether they had been in contact with him or knew his whereabouts.

Hughes is charged with desertion and awaiting pretrial confinement at Travis Air Force Base in Fairfield, Calif.

Desertion carries maximum penalties of dishonorable discharge, forfeiture of all pay and confinement of five years.