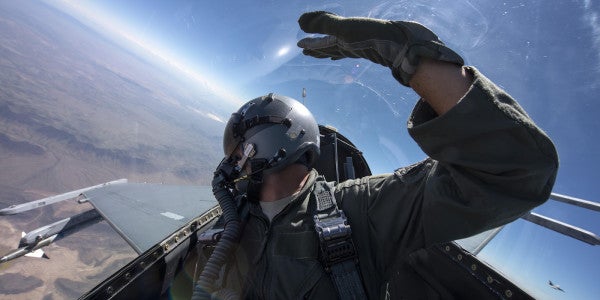 At the end of fiscal year 2016 in September that year, the Air Force had 1,555 fewer pilots than it needed, including 1,211 missing fighter pilots.

That shortfall is expected to increase, and the service has considered a number of steps to shore up its ranks, includingbroader recruiting, changing training requirements, increased bonuses, and even stop-loss policies.

The Air Force is also looking for outside contractors to provide “red air,” or adversary training, support.

According to a release issued on Friday, the Air Force is now looking to have retired pilots return to the service for up to 12 months in positions that require qualified pilots, an initiative called Voluntary Rated Return to Active Duty, or VRRAD.

The service is looking for up to 25 retired fliers of any pilot specialty code — which includesbomber, fighter, helicopter, tanker, and remotely operated aircraft pilots — to fill “critical-rated staff positions” and allow active-duty pilots to stay with units where they are needed to meet mission requirements, the release said.

“Our combat-hardened aircrews are at the tip of the spear for applying airpower against our nation's enemies,” said Air Force Chief of Staff Gen. David Goldfein. “We continue to swing away at this issue and we're looking at multiple options to improve both quality of life and quality of service for our pilots.”

Two other initiatives were announced on Friday.

Pay for officers and enlisted personnel will increase for the first time since 1999.

The Air Force will also offer aviation bonuses to more service members in fiscal year 2017, which runs until the end of September.

“The bonus is now being offered to a larger pool of pilots that includes those beyond their initial service commitments who have previously declined to sign long-term bonus contracts and those whose contracts have expired,” Grosso added.

First Lt. Kayla Bowers, a 74th Expeditionary Fighter Squadron A-10 Thunderbolt II pilot, looks out of the cockpit of her aircraft during the squadron’s deployment in support of Operation Atlantic Resolve at Graf Ignatievo, Bulgaria, March 18, 2016.

“We can’t afford not to compensate our talented aviators at a time when airlines are hiring unprecedented numbers,” Wilson said in the release.

Previously, Congress authorized the Air Force to increase bonuses from $25,000 to $35,000 for pilots who agreed to extensions, though that was less than the $48,000 the service requested.

With the current five- and nine-year extensions offered, a pilot could earn up to $455,000 in bonuses; the Air Force is also considering one- and two-year extension deals, Grosso said earlier this year.