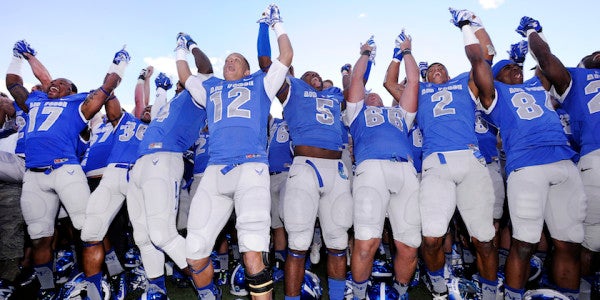 The difference is now there is no reason to ask about sexual orientation for prospective or current cadets.

The Air Force Academy's admission directorate follows the Department of Defense policy. Therefore, according to the academy's public affairs department, “When DoD repealed LGB as disqualifying factors for service in the U.S. military, the Academy Admissions followed the DoD guidance and no longer considers sexual orientation as one of the disqualifying factors defined by DoD.”

The enactment of Don't Ask Don't Tell under President Bill Clinton broadened the loopholes to which gays and lesbians could serve, but it didn't change the military's ban on homosexuals that resulted in the discharge of an estimated 100,000 military members between World War II and September 2011. Of those, many were given less-than-honorable discharges that barred them from veterans' benefits and complicated future employment.

It was five years ago this week that the ban on gays in the military was lifted on orders from President Barack Obama, Secretary of Defense Leon Panetta and Chairman of the Joint Chiefs of Staff Adm. Mike Mullen.

“Cadets must adhere to the stipulations of their “Cadet Standards” on the treatment of others despite their sexual orientation,” Air Force said in a statement to The Gazette. “The Cadet Standards states, 'All service members, regardless of their sexual orientation, are entitled to an environment free from personal, social, or institutional barriers that prevent service member from rising to the highest level of responsibility possible. Harassment or abuse based on sexual orientation is unacceptable and will be dealt with through command or inspector general channels.'”

Has the acceptance and protection of gays and lesbians been felt in athletics? Those who talked to The Gazette indicated there hasn't been a change.

“It really didn't impact us either way,” said former Air Force women's basketball coach Andrea Williams, who spent two years as a Navy assistant and recruiting coordinator before later serving five years on the Falcons bench. “I think it's a great policy decision, so people don't have to serve with fear.

“The conversation really never came up. And for the programs I've been associated with it was our policy not to pry.”

Prior to September 2011, the topic – at least theoretically – would have been a major deterrent to gays and lesbians recruited to play at service academies. After all, they would have been setting themselves up for five years of active duty in military branches in which they were not technically allowed to serve.

Paragraph after paragraph followed, specifying exact behavior that was prohibited and the many circumstances that would impact the severity of the infraction if the policy was violated.

Though it would no longer have repercussions on their military service, no Air Force athlete has publicly come out as gay or lesbian during their time with the Falcons. This does not make the Falcons unique, however, as the online publication OutSports reports there are just 50 publicly out athletes playing college sports. Of those, 38 are male and 22 participate in Division I sports. None compete in the Mountain West.

The small percentage of out collegiate athletes doesn't begin to touch on the impact of the topic as public sentiment on LGBT issues has swept over the sports landscape.

This month the NCAA pulled future championships out of North Carolina because of bathroom-related laws it views as discriminatory. The Atlantic Coast Conference quickly followed the NCAA's example and pulled conference events out of the state as well.

As the Big 12 considers expansion – talk that very much involves Air Force – the topic has also arisen as students at Iowa State and Texas have protested BYU's potential inclusion because of rules that prohibit “not only sexual relations between members of the same sex, but all forms of physical intimacy that give expression to homosexual feelings.”

Iowa State's student senate passed a resolution by a 21-6 vote to oppose the potential addition of BYU to the Big 12, saying those rules fail to meet the commitment laid out in the conference's handbook that stress “cultural diversity, promoting respect and sensitivity to the dignity of every person and fostering participation of all in competition, administration and governance” and it requires its member institutions to “refrain from discrimination prohibited by federal and state law, and to demonstrate a commitment to fair and equitable treatment of all student-athletes and athletics department personnel.”

Air Force could well have found itself under those same crosshairs had the policy change not occurred.

A record 38 out athletes recently competed at the Olympics, according to a count from OutSports. The WNBA, which includes at least seven publicly lesbian players, has added a Pride initiative to connect with its gay and lesbian fan base. And Nike recently cut ties with boxer Manny Pacquiao for comments about the LGBT community that company found to be “abhorrent.”

As a military institution, Air Force would be given a pass if its rules ran contradictory to any NCAA policies. This was the standard set when academies were specifically omitted from wording in Title IX when it was passed in the 1970s.

Sports served as a public testing ground as the nation slowly adapted its attitudes and policies on race. With more and more prominent athletes coming out in various sports and its increasing support of inclusionary policies and laws, it appears to be in the early stages of doing the same now in the fight for equality for the LGBT community.

Because of the repeal of Don't Ask, Don't Tell, service academies find themselves in the stream of those showing change and acceptance on the topic from a policy standpoint – even if any particular examples of this change in action have yet to present themselves.