After ending its 16-year permanent bomber presence in Guam, the U.S. Air Force this week flew a B-1B Lancer to the Pacific as part of its new unpredictable deployment experiment to test crews' agility when sending heavy aircraft forces around the world. 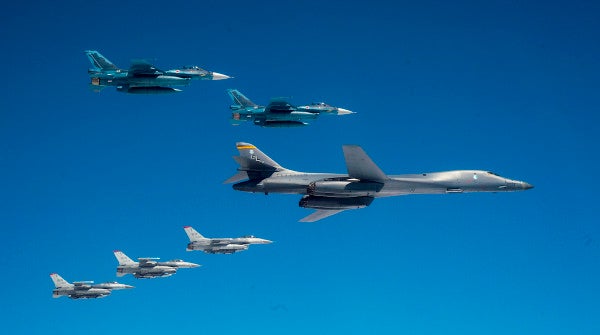 After ending its 16-year permanent bomber presence in Guam, the U.S. Air Force this week flew a B-1B Lancer to the Pacific as part of its new unpredictable deployment experiment to test crews' agility when sending heavy aircraft forces around the world.

The B-1, from the 28th Bomb Wing at Ellsworth Air Force Base, South Dakota, flew a 30-hour round-trip flight to Japan. There, it operated alongside six U.S. Air Force F-16 Fighting Falcons, seven Japan Air Self Defense Force F-2s and eight JASDF F-15s over Draughon Range near Misawa, Pacific Air Forces said in a release.

“This operation showcases our unwavering commitment to the security and stability of the Indo-Pacific region through the employment of strategic forces from around the globe,” said Gen. Charles “CQ” Brown Jr., head of Pacific Air Forces and U.S. Indo-Pacific Command.

“From confronting invisible threats of a global pandemic to addressing military aggression and coercive activities, we remain a lethal, innovative and interoperable force focused on a shared vision of upholding a free and open lndo-Pacific,” he said in the release.

“Like the advancements of our agile combat employment concept of operations, we continue to innovate and adapt our approach, to include how we deploy and employ the various weapons systems we integrate with our allies and partners,” Brown said. “Bringing the B-1 into theater ensures our bilateral interoperability accounts for any combination of flying operations to prepare for and outpace the rapidly growing threats in the Indo-Pacific region.”

The show-of-force flights come as Pentagon officials in recent weeks have stressed continued operations to deter rivals, despite the novel coronavirus pandemic.

“Adversaries who think now is the time to challenge the USA: You're dangerously wrong,” Defense Secretary Mark Esper said in a tweet last week.

On Friday, Esper renewed the message. “Our adversaries are not standing down,” he said. “We will continue to make sure that the [Defense Department] is ready to protect the USA.”

Last week, Air Force Global Strike Command announced that it is transitioning to a new model, ending the continuous bomber presence (CBP) mission in favor of forward-deploying bombers to the Indo-Pacific. For the last year, AFGSC officials have planned more and shorter strategic bomber rotations. The concept, known as “dynamic force employment,” mimics how the service often sends its bomber forces to Europe for weeks-long summer exercises.

The B-1 — call sign HYPER21 — was spotted Tuesday flying over the Bering Sea near Russia's Kamchatka Peninsula, crossing over into the northern Pacific. The news was first reported by The Drive, citing movements reported by tracker @AircraftSpots on Twitter.

The Lancer's return to the Pacific, albeit short, marks the first for the long-range bomber since 2018. Between 2016 and 2018, the B-1 held the CBP deterrence mission, housed at Andersen Air Force Base, Guam.

“The rapid employment of airpower directly supports the National Defense Strategy and assures we can provide overwhelming force anywhere, anytime in support of American interests or our allies and partners,” said Gen. Tim Ray, AFGSC commander. “This mission is a demonstration to our friends throughout the region: We will continue to remain fully predictable in our commitment to ensuring peace, while also demonstrating that we have the ability to operate from numerous locations across the globe, even during the global pandemic.”

The latest flight was the second bilateral training to occur with a bomber this year, officials said. In February, two B-52 Stratofortress bombers flew alongside six Air Force F-16s and more than 45 JASDF fighter aircraft near Japan, according to the release.