60 years ago, an Air Force pilot flew his B-47 bomber under a Michigan bridge

It's been 60 years since a daring Air Force pilot made headlines after he flew his Boeing B-47 jet underneath the Mackinac Bridge in Michigan on April 28, 1959 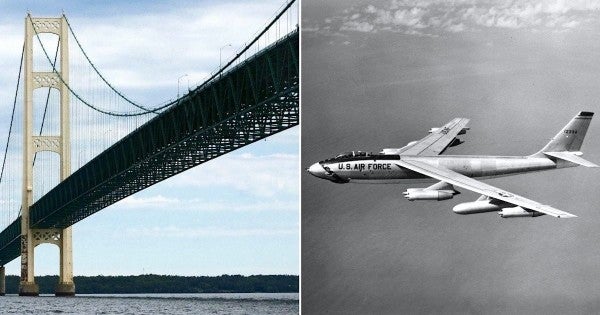 MACKINAW CITY, MI — It's been 60 years since a daring Air Force pilot made headlines after he flew his Boeing B-47 jet underneath the Mackinac Bridge on April 28, 1959.

The pilot, Air Force Capt. John S. Lappo did not have permission to perform the dangerous stunt on a Friday afternoon but the Muskegon native pulled it off.

The illegal move eventually ended up with Lappo being accused of violating Article 92 of the Uniform Code of Military Justice at general court-martial in Aug. 1959. At the time, pilots were not allowed to fly the plane less than 500 feet from the ground or water expect during takeoff and landing.

Although he never flew again for the Air Force, he eventually retired at the rank of Lt. Col in 1972. He died in 2003, but even in his death, the story of his stunt would be shared.

“Mr. Lappo made headlines in August 1959 when he flew a B-47 bomber under the Mackinac Bridge in Michigan,” reads a portion of his obituary published in the Anchorage Daily News on Nov. 22, 2003.

SEE ALSO: The Greatest 'Hold My Beer' Moment In American History Is Thanks To This Drunk Marine Veteran

WATCH NEXT: That Time A Pilot Took An F-16 On A Booty Call