B-52 bombers are ‘competing every day’ over Europe to send a message to Russia, top Air Force officers say

A flurry of U.S. Air Force activity over Europe in recent weeks is meant to reassure allies and signal to Russia that it won't interfere with those relationships, the head of planning for U.S. Air Forces in Europe and Africa said Tuesday 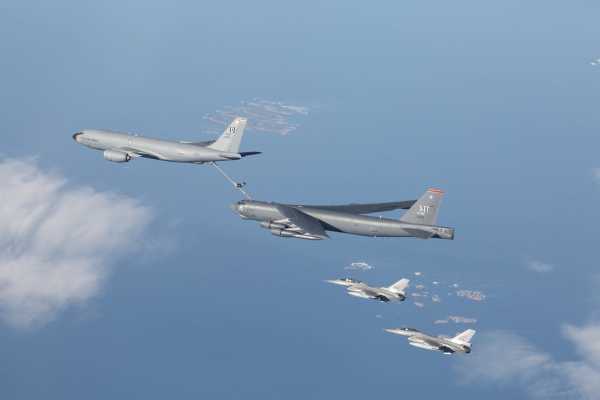 A flurry of U.S. Air Force activity over Europe in recent weeks is meant to reassure allies and signal to Russia that it won't interfere with those relationships, the head of planning for U.S. Air Forces in Europe and Africa said Tuesday.

Six B-52 bombers flew from North Dakota to Europe late last month, landing in the UK on August 22 for what the Air Force called “a long-planned training mission.” Since then, the venerable bombers have flown all over Europe.

A training flight with British and French fighter jets on August 27 was followed by a single-day flight over all 30 NATO members “to demonstrate NATO solidarity, enhance readiness, and provide training opportunities,” the Air Force said. (Four B-52s in the UK flew over Europe, while two in North Dakota flew over Canada and the US.)

The bombers concluded August by training with other NATO aircraft over the Baltic Sea and started September with another flight over the Norwegian Sea.

Other missions this month have taken B-52s over Ukraine and the sensitive area around the Sea of Azov, as well as to Morocco and Spain.

These Bomber Task Force missions reflect the “emphasis on competing every day” that comes from Gen. Tod Wolters and Gen. Jeff Harrigian, the Air Force generals who lead U.S. European Command and U.S. Air Forces Europe-Africa, respectively, according to Brig. Gen. Adrian Spain, the director of plans, programs, and analyses under Harrigian.

“I think what you're seeing in the Bomber Task Force and in operations in the Black Sea and up north and in the Baltics is essentially ensuring that U.S. aircraft fly in international airspace where we are allowed to fly and exercising our ability and right to do so with our partners and ensuring that Russia sees that there is nothing that they are doing that is breaking up the alliance and the partnerships that we have in this theater,” Spain said Tuesday at a Mitchell Institute Aerospace Nation event.

The 30-country overflight was an example of that cohesion, Spain said.

“I think that this is a prime example of the thing that has some of the biggest effect, frankly, in proving that there is no daylight between us and the alliance,” Spain said. “While always imperfect, [the alliance] is also still strong and our partnerships are still strong, and any attempt to come between us in that way isn't going to work.”

'An opportunity for growth'

The B-52 flights haven't gone without incident. During the 30-country overflight on August 28, the Air Force reported an “unsafe and unprofessional” encounter with Russian fighter jets over the Black Sea.

Su-27 fighters crossed “within 100 feet of the nose of the B-52 multiple times” while on afterburner, “causing turbulence and restricting the B-52's ability to maneuver,” the Air Force said.

Such actions “increase the potential for midair collisions,” Harrigian said in a statement. “While the Russian aircraft were operating in international airspace, they jeopardized the safety of flight of the aircraft involved.”

The same day, an Su-27 intercepted a B-52 over the Baltic Sea and followed the bomber “well into Danish airspace … committing a significant violation of airspace of a NATO nation,” NATO said in a press release.

The Russian fighter left the area before Danish aircraft arrived to intercept it, but Harrigian said in the release that the “incident demonstrates Russia's disrespect of international norms and for the sovereign airspace of an Allied nation.”

Russian defense officials said the fighters over the Black Sea acted in “strict compliance with the international air law” and denied the fighter flew into Danish airspace.

Encounters between Russian and NATO aircraft over Europe have become more frequent, reflecting rising tensions since Moscow's 2014 seizure of Crimea and incursion in Ukraine.

NATO stresses that its maneuvers, which take place in international waters and airspace, are defensive in nature, but Russia — like the U.S. — is wary of foreign military activity near its borders.

Russian officials say their aircraft have scrambled seven times this month to intercept NATO surveillance aircraft over the Barents Sea, waters near important Russian military bases and where both sides are increasingly active.

Related: US B-52s train with Ukrainian fighter jets near Crimea in an 'in your face' message to Russia

B-52s began training in North Africa on Monday, with plans to fly with Moroccan F-16s and to practice maritime interdiction in the southern Mediterranean Sea by intercepting the USS Roosevelt as the Navy destroyer played the role of a hostile vessel.

Air Force aircraft already conducted training with U.S and NATO navies this summer in the Black Sea — another hotbed for military activity.

“I think what you'll see is that the Bomber Task Force missions are going to continue to emphasize the partnerships and interoperability and integration” with air, ground, and joint forces, Spain said.

The training with naval forces “was highly effective” and there's “certainly an opportunity for growth there,” Spain added. “I think you're going to see us take advantage of that as often as we can.”