Following a recent spike in airborne confrontations between the U.S. and Russian militaries, three B-52 Stratofortress bombers joined Ukrainian fighter jets for training Friday, and were also spotted skirting the Crimean peninsula, in a move one observer called an "in-your-face statement" to Russia 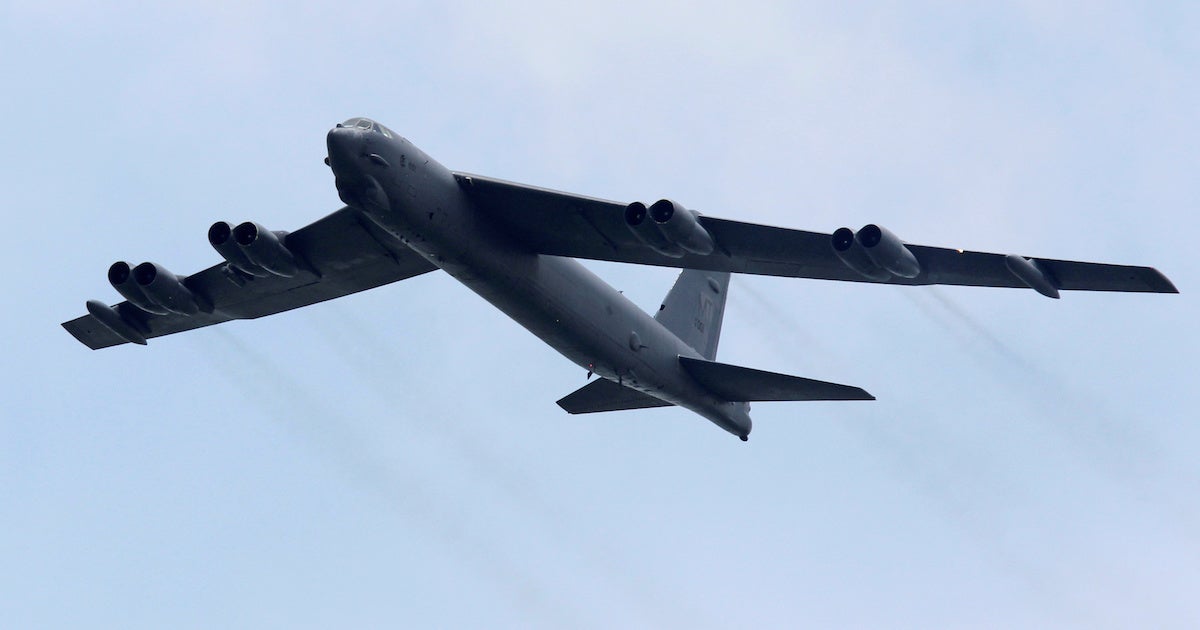 Following a recent spike in airborne confrontations between the U.S. and Russian militaries, three B-52 Stratofortress bombers joined Ukrainian fighter jets for training Friday, and were also spotted skirting the Crimean peninsula, in a move one observer called an “in-your-face statement” to Russia.

“The mission demonstrated how forward-located aircraft and crews, such as those in the B-52 units, enable collective defense capabilities and provide the U.S., NATO Allies and partners strategic and operational breadth to deter Russia and assure Allies and partners,” the release said.

Earlier Friday, aircraft spotters on social media noted two B-52s headed southeast toward Crimea — land claimed by Ukraine that was annexed by Russia in 2014. Hans Kristensen, director of the Nuclear Information Project for the Federation of American Scientists, noted the aircraft currently deployed to Europe are capable of carrying nuclear weapons.

Related: The US and NATO are boosting their presence in a hotspot for military activity near Russia

The Air Force maintains 66 nuclear-capable B-52H aircraft out of 75 aircraft total at Barksdale Air Force Base, Louisiana, and Minot, according to the Congressional Research Service. Only 44 are assigned to nuclear missions on a day-to-day basis, CRS said in its 2018 U.S. Strategic Nuclear Forces report.

“Extraordinary decision to send a nuclear bomber so close to contested and tense areas,” Kristensen said on Twitter. “Their long-range missiles and vulnerability to air-defense mean they would likely never fly this close in a war, so this is a real in-your-face statement.” Spotters saw B-52s just 25 kilometers shy of the Crimean border.

The flights come one week after a B-52 formation flew across all 30 NATO countries in a single-day mission — dubbed “Allied Sky' — meant to showcase solidarity with partners in the region.

But during the bombers' flight over the Black Sea Aug. 28, two Russian Su-27 Flanker jets turned on their afterburners, coming within 100 feet of one of the B-52s.

Related: 'Unsafe' intercept of a B-52 over the Black Sea is the latest example of the Russians being jerks

Air Force Gen. Jeff Harrigian, commander of U.S. Air Forces Europe-Air Forces Africa, responded to the event, saying, “While the Russian aircraft were operating in international airspace, they jeopardized the safety of flight of the aircraft involved. We expect them to operate within international standards set to ensure safety and prevent accidents.”

“This year, we've conducted more than a dozen intercepts, the most in recent years,” Gen. Glen VanHerck, commander of NORAD, said in a statement.

Experts have argued that, while the intercepts expose a pattern of behavior from the Russian military, they also show that Russia is willing to capitalize on the publicity the aerial maneuvers bring — even during the ongoing global pandemic.

While the U.S. classifies its operations as “routine,” the Pentagon aims to test its units' agility when deploying heavy aircraft forces.

Called Bomber Task Force, or BTF, missions, the shorter flights — using two to four bombers — have been a regular occurrence since the spring as part of the Defense Department's larger “dynamic force employment” strategy for military units to test how nimbly they can move from place to place.

The European theater has had at least one bomber rotation per year as part of Operation Atlantic Resolve since Russia's incursion into Ukraine in 2014.

EUCOM on Friday said that since 2018, the U.S. and allies have conducted more than 200 sorties as part of a BTF mission.

These recent exercises are not the first time bombers have trained alongside partners near Russia's borders this year.

In May, two B-1B Lancers from the 28th Bomb Wing at Ellsworth Air Force Base, South Dakota, marked their first-ever flight with Ukrainian Su-27 Flankers and MiG-29 Fulcrums over the Black Sea. At the same time, the long-range bombers also trained in launching the Long-Range Anti-Ship Missile, known as LRASM, officials said.

Russian forces took note of those integration exercises over Eastern Europe. Russia's Ministry of Defense at the time noted an uptick in NATO and U.S. activity in the region, including the transit of a B-1 through the Sea of Okhotsk on May 22, and near the Kamchatka Peninsula in April.