Editor’s Note: This article by Hope Hodge Seck originally appeared on Military.com, a leading source of news for the military... 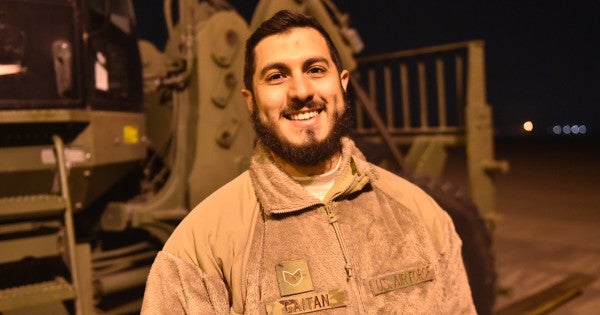 Editor’s Note: This article by Hope Hodge Seck originally appeared on Military.com, a leading source of news for the military and veteran community.

An airman from the 821st Contingency Response Support Squadron at Travis Air Force Base, California, can now wear a beard in keeping with his Muslim faith, thanks to a recently granted religious accommodation waiver, service officials said.

Staff Sgt. Abdul Rahman Gaitan is the first Muslim airman to receive such a waiver, public affairs officials with Travis told Military.com. It was approved Aug. 1.

According to a news release about Gaitan, the airman was raised Catholic but developed an interest in Islam during a 2011 deployment to Izmir, Turkey, where the Air Force maintains an air station. He continued his pursuit of the faith as he moved on to his next duty station in Hawaii, and ultimately decided to convert.

Getting authorization to grow a beard in keeping with his new faith, however, would require nearly four more years of effort, according to the release.

In 2014, the Pentagon released a new policy outlining how religious service members might apply for a waiver to wear otherwise-prohibited items — such as a turban, headscarf or beard — as a way of expressing “sincerely held beliefs.” The policy made clear that such accommodations would be granted on a case-by-case basis and could be denied if the request was seen to interfere with wearing a uniform or helmet, impede work or pose a health or safety hazard.

Since Gaitan was granted his own waiver, he said he has received some negative backlash, but also support from his chain of command, according to the service release.

“A month after I started growing my beard, someone shooed me away with their hand saying very negative things because I was a Muslim. A week later, another person from a different squadron felt comfortable enough to ask me if I had joined ISIS,” Gaitan said in a statement. “These two incidents weren't the only ones. Earlier … someone openly questioned if I was a terrorist.”

However, he said, he was defended by his peers on the spot, and the matter was quickly elevated to senior officials, who reassured him he had their support.

“The incident shot straight to the commander, like a lightning bolt, and the following morning I was called into his office with the chief and first sergeant waiting for me,” Gaitan said in the release. “In my entire career, I've never had a commander look me in the eyes like he did … his look, tone, words and posture were shouting at me, 'Don't worry, we have your back.' “

The Army has led the services in granting allowances for religious troops. In 2017, the service streamlined the process for Muslims and Sikhs to obtain a waiver to wear beards and turbans and other religious headgear. While these troops are still required to receive case-by-case permission at the brigade level, the waivers, once approved, are now permanent throughout the soldier's career.

The Army made headlines again earlier this year when it granted the first beard exemption to a self-professed Norse Pagan soldier.

Ahead of Air Force Chief of Staff Gen. David Goldfein's confirmation hearing in 2016, he answered a number of questions from Congress on service policy regarding religious exemptions for troops. His answers gave no indication of any plans to broaden policies currently in place for observant airmen.

“The Air Force has granted dress and grooming religious accommodation requests in the past,” he said in written responses. “Such requests will continue to be carefully evaluated and accommodations granted unless doing so adversely impacts military readiness.”

SEE ALSO: You Can Now Grow A Beard And Get Stoned AF In The Canadian Military