The Air Force Blames Its Serious Pilot Shortage On Lawmakers

The U.S. Air Force faces a shortfall of 700 fighter pilots by the end of the year and as many... 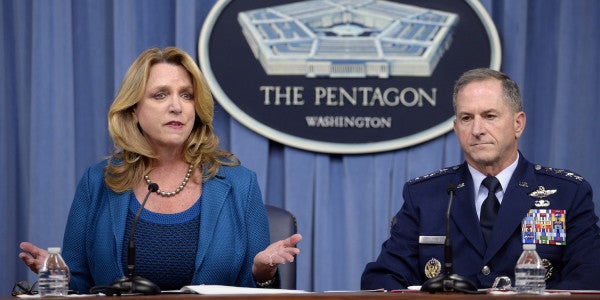 The U.S. Air Force faces a shortfall of 700 fighter pilots by the end of the year and as many as 1,000 pilots within a few years, Air Force officials said Wednesday.

“It is a crisis,” said Gen. David Goldfein, the Air Force chief of staff. “Air superiority is not an American birthright. It’s actually something you have to fight for and maintain.”

Aggressive hiring by commercial airlines has helped thin the ranks of Air Force pilots, and lengthy deployments overseas, long separations from family and reduced flying time when back on U.S. soil have exacerbated the problem, Goldfein said.

But Secretary of the Air Force Deborah Lee James said legislators on Capitol Hill, locked in partisan gridlock, shouldered part of the blame. She said lawmakers had failed to approve military budget requests that would increase retention bonuses for fighter pilots, which have been at $25,000 a year since 1999, to $35,000 a year.

“We need the authority now specifically because we need to address a number of shortfalls, the most important of which at the moment is the 700 fighter pilot shortfall that we’re currently facing by the end of this very year, with 1,000 pilots that we’re projected to be short in just a couple of years,” James said at the Pentagon briefing.

Goldfein said air conflicts dating to the no-fly zone over Iraq in the 1990s had contributed to a sense of fatigue among pilots.

“We’re coming out of, for the Air Force, 25, 26 years of continual combat,” Goldfein said, “and so the force has been engaged at a much higher level. That translates to much more time away from home.”

Even when pilots return from overseas they often are called away, James said. “They have to go off to a major exercise to try to train up again for the high-end fight.”

Veteran fighter pilots commonly face a choice of re-enlistment when they attain the rank of major after 11 years or so of service. At that time, their compensation package, including housing allowances, might reach around $125,000 a year, said spokeswoman Ann M. Stefanek.

When Air Force pilots leave for jobs as commercial airline pilots, their pay goes down the first year, then rises to a level equivalent to the Air Force in the second year, she said.

“The third year, (the salary of) the airline pilot goes way up. It’s about $180,000ish,” Stefanek said, and intangible benefits also accrue. “You’re not deploying. You don’t have family separations.”