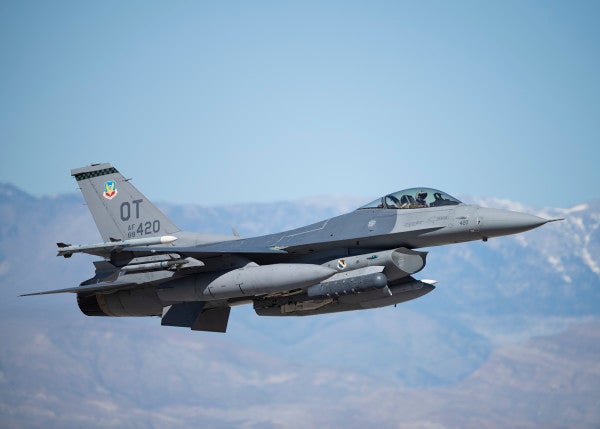 The 2,000-pound bomb, part of a family of warheads that also includes the 500-pound BLU-134, releases deadly metal fragments instead of the “bomblets” released by the CBU-87 and CBU-103 cluster munitions.

“The fragmentation of the BLU-136 is non-explosive, making it a less-hazardous alternative to cluster munitions,” the Air Force said in a statement.

Rings were drawn around the target at radii of 75, 150, and 225 feet, Military.com reported. Fragments were found outside the largest ring. “Within 150 feet, severe damage is likely to occur,” 53rd Wing spokeswoman 1st Lt. Savanah Bray told the outlet.

The BLU-136 NGAAW is similar to the BLU-109 bunker buster bomb and can be combined with the Joint Direct Attack Munition (JDAM) guidance system, making it possible for other aircraft to carry the weapon with little to no changes being required. In this this configuration, the BLU-136 has the designation GBU-31v11.

A total of 10 BLU-136 bombs were dropped during the recent tests, which were conducted at the Nellis Test and Training Range.

Lt. Col. Daniel Lambert, 28th Test and Evaluation Squadron Global Strike division chief, explained in a statement that “the operational tests were designed to gather data to determine the operational performance of the BLU-136.”

The Air Force was looking closely at “blast and fragmentation damage,” he said, adding that “this data will help decision makers determine if the BLU-136 is a viable substitute for the Air Force's fleet of cluster bomb.”

While the U.S. is not a signatory to the Convention on Cluster Munitions, an international treaty that prohibits the use of cluster bombs, explosive weapons that scatter submunitions, it has taken steps to make changes to its arsenal.

The Air Force first started developing the BLU-136 as an “area attack” alternative to cluster bombs following a 2008 Department of Defense policy directive in response to civilian casualties as a result of unexploded cluster munitions left on foreign battlefields.

The Department of Defense policy directed the military to phase out the use of cluster bombs with a failure rate greater than 1 percent by the end of 2018. Unable to develop cluster munitions that met that standard, the military began exploring alternatives.

The Pentagon backtracked in 2017 though, deciding to indefinitely put off its decision to stop using these problematic munitions. Nonetheless, work on possible alternatives continues.