Air Force Brig. Gen. Brenda Cartier, the service's first female air commando, recently received a letter of counseling after an Inspector General investigation found that she had failed to treat her subordinates "with dignity and respect" in her previous job, according to the IG documents 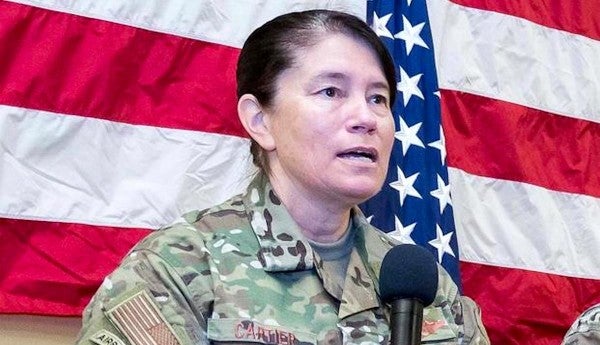 Air Force Brig. Gen. Brenda Cartier, the service's first female air commando, recently received a letter of counseling after an Inspector General investigation found that she had failed to treat her subordinates “with dignity and respect” in her previous job, according to the IG documents.

Cartier, who was a colonel when she transitioned from the 58th Special Operations Wing at Kirtland Air Force Base, New Mexico, to become director of operations at Air Force Special Operations Command headquarters last year, also falsified her flight hours with intent to be credited for those hours, according to the investigation. The news was first reported by Air Force Timeslast week.

Cartier's official promotion ceremony, which was postponed given the investigation, is slated for June 14, spokeswoman Ann Stefanek told Military.com on Tuesday. Her promotion to brigadier general was effective in August 2018 and is retroactive to that date for pay purposes, she said.

An investigation into Cartier's conduct, spurred by a number of complaints over “toxic leadership,” began after she left Kirtland for her new role, according to the redacted report provided to Military.com. Cartier was the wing commander of the 58th from June 2016 to July 2018.

The IG interviewed 28 witnesses between July 2018 and February 2019; Cartier was interviewed in November 2018, the document states. The investigation was completed in March.

Some airmen interviewed said they regarded Cartier, qualified as a combat systems officer on the MC-130J Commando II, as a mentor, while others called her cruel or “mean and demeaning,” saying she often “played favorites.”

“I don't think she realizes how toxic or how abrasive she can be, despite I have given her feedback,” said a former squadron commander, who was unnamed in the documents.

The investigating officer found that Cartier referred to one of her subordinates, also unnamed in the report, as a “f—ing idiot” in conversation on multiple occasions in 2017.

In another incident, the report noted that an airman was “going through a personal strife with the end of his marriage,” but Cartier “failed to treat with dignity and respect when she publicly chastised him for giving a bad briefing, telling him to send a human or someone who can brief the next time.” It was not immediately clear whether this was the same airman she repeatedly called an idiot.

During her interview, Cartier denied that she would ever say something to the effect of “send me a human” or that she had called any individuals “f—ing idiot.”

“Wow, no. I mean, that's not terminology I would use,” she stated in her interview with investigators in November.

Referring to the presentation briefing, she said, “I mean, I would say send somebody who can brief, that part, yes.”

She admitted she had “work to do in this area,” referring to how she talked with or addressed subordinates overall.

The investigation also found that Cartier falsely claimed at least four hours of primary combat systems officer duty (CSO) “with intent to deceive” and thus intended to be “credited with primary time.” This allowed her to receive $250 in flight incentive pay as a result, officials said.

During a flight to Joint Base San Antonio-Randolph, Texas, from Kirtland, Cartier, wearing the Airman Battle Uniform and not a traditional flight suit, boarded the 4.2-hour flight but did not perform the standard CSO duties. Another CSO crew member was also on board.

“I just assumed that she was going to be a passenger,” one witness said, explaining that Cartier wasn't in the pre-flight brief or wearing a flight suit.

With the other CSO on board, that meant Cartier took the majority of the paid log time for herself, with the other member able to log only 0.2 hour. Air Force regulations allow for crew members in the same capacity to split time between them. They cannot both take full credit for the flight.

A complaint was filed shortly after the flight.

Cartier denied stating “mark me down for four” hours, the IG said. “I didn't need time or want the time,” she said in her interview.

After her IG sit-down at the Pentagon, Cartier contacted the Host Aviation Resource Management (HARM) Office to adjust the flight time. But the IG noted that Cartier should not have noted any flight hours at all because “she performed no primary hours for this mission.”

Cartier told HARM to put her down for 2.1 primary hours and 2.1 hours marked as “other.”

“Col. Cartier should have reasonably known she did not perform four primary hours on the 25 Jul 17 mission,” the report states.

SEE ALSO: Why The Air Force Wants To Keep American Taxpayers In The Dark

WATCH NEXT: The Legacy Of AFSOC