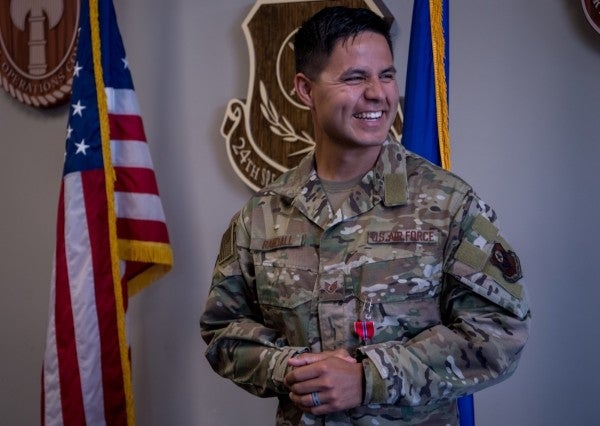 An Air Force surgical technician has been awarded the Bronze Star for his life-saving work providing care for more than 600 combat casualties while deployed to the Middle East last year.

The team supported U.S. and partner forces in the fight against the Islamic State during the deployment. At one point during the mission, the team faced a counterattack from militants at an undisclosed location. But they pressed on to treat, “stabilize and evacuate 51 blast and gunshot wound casualties in the team's largest mass casualty event, all while under the constant threat of small-arms and mortar fire,” according to the release.

“We enable our allies to stay in the fight,” said Randall, who entered the service in 2012. “They know they have that American team that's going to take care of them. We're moving with them, and we would be right there. They appreciated us, and we appreciate them. … We built a bond.”

“I am extremely proud of Staff Sgt. Randall and his team for the amazing work they did in support of Operation Inherent Resolve,” said. Lt. Col. James Webb, SOST director. “Damage control resuscitation and surgery are challenging even in the most ideal situations, but to perform at such a high level in the most extreme environments, hours forward of the closest hospitals, is a testament to the mental and physical fortitude of him and his team.”

In 2018, a team of five received Bronze Stars for their work in Syria in 2016. Those SOST members treated more than 750 patients, in some cases under direct assault by Islamic State fighters.