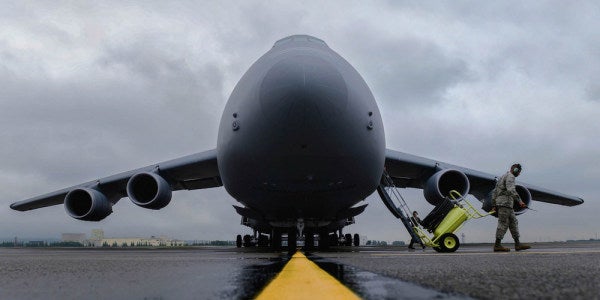 On July 17, Air Mobility Command chief Gen. Carlton Everhart ordered all 18 of the Air Force's C-5 Galaxy cargo planes at Dover Air Force Base to halt operations and undergo inspections after two of the aircraft had landing-gear malfunctions in less than a 60 day period.

Two days later, Everhart extended the stand-down to all 56 of the Air Force's C-5s, ordering them all to undergo maintenance assessments.

The ball-screw assembly on the C-5 Galaxy, the largest plane in the Air Force, was causing problems with the landing gear's extension and retraction, according to Air Force Times.

The C-5's nose landing gear uses two ball-screw drive assemblies working together to extend and retract, according to the Air Force. If one of the assemblies doesn't work, the gear can't operate. (The Dover stand-down came a little over a year after the C-5M Super Galaxies stationed there achieved the highest departure-reliability rate in their history.)

Inspections revealed that the parts needed to fix the malfunctions are no longer made. But, Everhart told Air Force Times, maintenance personnel were able to get the needed parts from the aircraft “boneyard” belonging to the 309th Aerospace Maintenance and Regeneration Group at Davis-Monthan Air Force Base near Tucson, Arizona.

As of Sept. 1, 38 of the Air Force's 56 C-5s were back in service. By Sept. 3, three of them had been sent to support hurricane relief efforts in Houston.

“Returning the C-5 to service so quickly is a maintainer success story. I can’t say enough about our maintainers’ ingenuity, hard work and pride,” Everhart told Air Force Times, adding that his command was looking at adaptive techniques like 3D-printing to supply parts and at predictive maintenance to catch malfunctions before they happen.

A northern aerial view of the “Boneyard” of the 309th Aerospace Maintenance and Regeneration Group at Davis-Monthan Air Force Base, Ariz.Photo via DoD

The Air Force's “boneyard” in Arizona (there is more than one “boneyard“) provides long-term storage for a wide array of mothballed or unused aircraft — more than 3,800 as of mid-2016. Though they languish under the desert sun, low humidity in the air and low acid levels in the soil make it a good place to keep aircraft.

It's not unusual for the Air Force to pull parts, or even entire planes, from the sprawling facility.

In summer 2016, the Marine Corps announced that it planned to refurbish 23 F/A-18C Hornets stored at the base in response to a shortage of usable aircraft. In October 2016, after a 19-month restoration process, the Air Force returned to service a B-52H Stratofortress bomber that had been mothballed at Davis-Monthan.