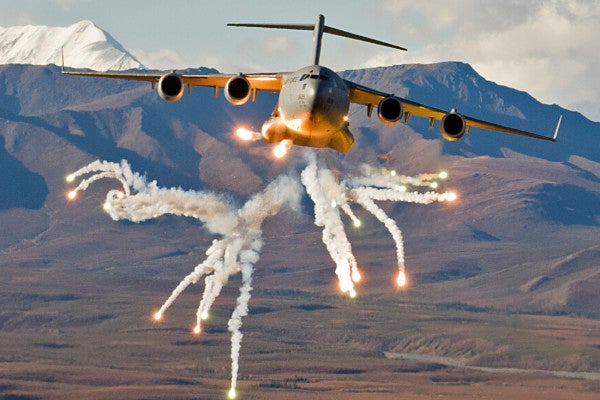 The U.S. Air Force has been experimenting with turning its cargo and transport planes into munitions trucks able to drop devastating bundles of standoff weaponry, the service has revealed.

Four of the six munitions on a pallet were simulated “Cargo Launch Expendable Air Vehicles with Extended Range (CLEAVERs),” which AFRL explained are “long-range, high-precision weapons” able to “destroy moving and non-moving targets.”

Col. Garry Haase, the director of AFRL's Munitions Directorate, said in a statement that “CLEAVER represents a different approach to launching large numbers of long-range weapons, which will bring a new dynamic to the high-end fight.”

Palletized munitions, described as a “bomb bay in a box” in a February request for information, could be released from outside the threat zone.

The RFI said that “delivering standoff type weapons in mass, from non-traditional delivery platforms, is one potential option to deliver mass firepower and could prove pivotal in future conflicts,” especially against peer adversaries.

“It's all about capacity, and you've got to create enough capacity so that long-range punch is really a punch,” Maj. Gen. Clint Hinote, deputy director of the Air Force Warfighting Integration Capability office, said of the strike concept at a Mitchell Institute event Wednesday, Breaking Defense reported.

In addition to the MC-130J airdrop test, the Air Force has reportedly also tested the “palletized munitions” concept with a C-17 Globemaster III military transport aircraft.

“What we see is that no matter how big our bomber force is, the capacity that the joint force needs is always more and more,” Hinote said Wednesday, according to Defense News. “This is why we think that there is a real possibility here for using cargo platforms to be able to increase the capacity of fires.”

“We are in discussions right now about how do we proceed to prototyping and fielding,” he said.