Editor’s Note: This article by Gina Harkins originally appeared on Military.com, the premier source of information for the military and veteran community. The Air Force is... 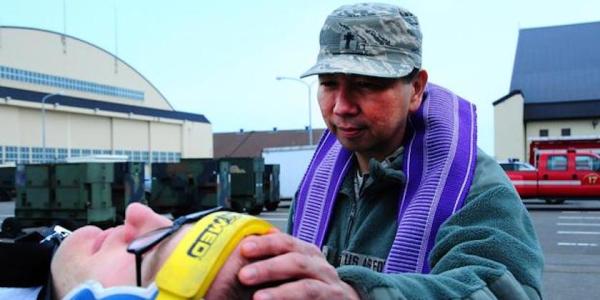 The Air Force is looking into comments a Catholic chaplain made at a base chapel in which he allegedly equated child abuse in the church with homosexuality, prompting one officer's family to walk out of mass.

Capt. Antonio Rigonan, an Air Force chaplain at Goodfellow Air Force Base in San Angelo, Texas, said during an Aug. 19 service that many priests who've abused children were “homosexuals” and “effeminate,” according to a military officer's spouse who attended that morning.

After Rigonan allegedly repeated the stance several times, the spouse said her family got up and left. The woman, who spoke to Military.com on the condition of anonymity to protect her husband's career, said she felt “very incapable of fixing” the wrongdoing she felt occurred that day.

“I've had to talk about a lot of serious things with , who didn't understand why we were upset,” she said. “It's at least been a good message on consent and being aware of other people's intentions.”

Goodfellow officials said they were not aware of Rigonan's comments before Military.com inquired about them. There are no recordings of chapel services, base public affairs officials said, but “Goodfellow leadership is looking into what comments were made.”

The officer's spouse contacted Archbishop of the Military Services Timothy Broglio the day after she attended mass to share her concerns about Rigonan's comments. Broglio oversees all Catholic pastoral ministries and spiritual services at more than 220 U.S. military installations worldwide.

Broglio's response took her aback, she said. While he said he didn't agree with Rigonan's word choices, the archbishop wrote that he stood by the chaplain's comments concerning homosexuality, according to a copy of the email reviewed by Military.com.

“There is no question that the crisis of sexual abuse by priests in the USA is directly related to homosexuality,” Broglio wrote. “[Ninety percent] of those abused were boys aged 12 and over. That is no longer pedophilia.”

The officer's family hasn't been back to mass on base and won't be attending future services at Goodfellow, the spouse said. Instead, they'll find a church off base. But troops and their families deserve better, she added.

“Being a homosexual is not the same as a pedophile,” she said. “I want young people in the military to feel welcome when they're on base. How is the military affecting how they feel about their new home if they hear comments like that?”

Responding to a scandal

Rigonan's alleged comments in the Goodfellow chapel came just days after an explosive report released by a grand jury in Pennsylvania detailed how Catholic Church leaders covered for hundreds of priests who sexually abused more than 1,000 victims over several decades.

The Air Force chaplain read a letter from the San Angelo bishop that took a hard stance against pedophilia, the military spouse said. The bishop also pledged to review a connection between a priest placed in the central Texas diocese years prior who'd been named in the grand jury's report.

“It was this very thoughtful and good letter,” the spouse said. “He gave the hotline number people could call if they had experienced any abuse, and we were really happy with that.”

Rigonan then asked the parishioners if he could share his own thoughts on the matter, she said. Since Goodfellow is a training base, there were a lot of young troops attending mass alone, she said, and her officer husband quickly grew uncomfortable with the idea that his presence might be viewed as standing by the chaplain's comments.

“It's the very opposite of what the military puts out there, especially with the dropping of 'Don't Ask, Don't Tell’ and celebrating Pride month and everything,” she said. “…We didn't want to sit there and let people think we're OK with that.”

When chaplains like Rigonan are conducting mass or other services, they are performing duties in accordance with the requirements of their religious institutions, according toofficial Air Force guidance updated in January.

Chaplains are also protected by a host of religious rights put in place by Congress, said Ann Stefanek, an Air Force spokeswoman at the Pentagon.

The military can't require a chaplain to perform any rite, ritual or ceremony contrary to their moral principles or religious beliefs, according to public law. And the services cannot “cannot take any adverse personnel action against a chaplain, including denial of promotion, school, training or assignment” if they don't comply with requirements in which they don't believe.

That is also backed up by Defense Department policy, Stefanek said.

The Air Force spouse said she just wants troops and their families to feel safe at the base chapel — especially after reading Broglio's comments about male victims over the age of 12.

“Children are children,” she said. “They cannot give consent.”

A spokesman for the Archdiocese for the Military Services, who was not authorized to use his name, said the number of cases of sexual abuse by priests has “declined markedly” since 2002.

The comments in Broglio's email were his own, the spokesman said, adding though that he was “simply reading the facts.”

“The archbishop believes that any abuse of anyone, regardless of his or her age, is a sin,” the spokesman said. “When it involves someone under 18 or a vulnerable adult, it is also a crime.”

Still, he added, the issue of “homosexual attraction” cannot be ignored since most of the victims of sexual abuse by priests in the last century were committed against males 12 and above.

“Otherwise,” the spokesman added, “would one not expect that the victims would have included more females?”

Ensuring troops and their families feel safe attending mass at Goodfellow or any other base activity is a top priority, according to officials there. Anyone uncomfortable with comments being made by religious leaders can submit those concerns through the “Ask Your Commander” hotlineor website or by contacting base public affairs.

They also have the option to reach out to their chain of command, the wing commander, inspector general, security forces or the office of special investigations.

Chaplains, chaplains' assistants, religious program specialists and others interacting with children under the age of 18 on a Defense Department base also undergo background checks, Stefanek said.

“Safety of our children is paramount,” she said.