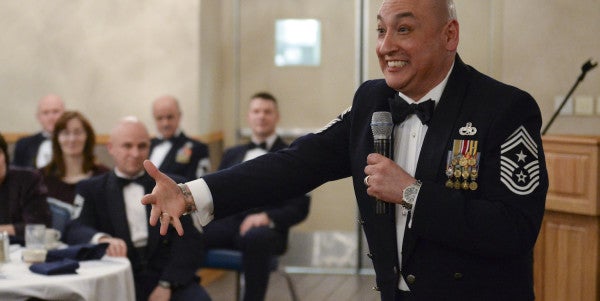 Chief Master Sgt. Jose A. Barraza will now face 17 charges Tuesday at his Article 32 hearing at Davis-Monthan Air Force Base in Arizona, the Air Force said. The hearing will determine whether Barraza should face a court-martial.

No additional details were provided. However, the Air Force has previously said the charges were tied to Barraza’s time as the top noncommissioned officer at Davis-Monthan Air Force Base. The base is home to the Boneyard, where preserved and retired aircraft are stored, and a sizable fleet of active A-10 aircraft.

Barraza was highlighted as a success story by the Air Force for escaping a rough childhood, according to an article by Airman Magazine. Barraza grew up in south-central Los Angeles. He joined a gang and was shot five times before a judge sentenced him to rehabilitation after Barraza assaulted a rival gang member.

Barraza rose to command chief master sergeant, a position responsible for all of the enlisted personnel in the 12th Air Force, in June 2015. He was removed from duty in November due to “loss of confidence in his ability to carry out his duties,” the Air Force said at the time.

Since he was charged March 30 with 15 violations initially, the Air Force has declined to describe the circumstances for the counts against him, citing an investigation was ongoing. On May 18, Col. Scott C. Campbell, the 355th Fighter Wing commander, added the two additional charges for indecent recording.