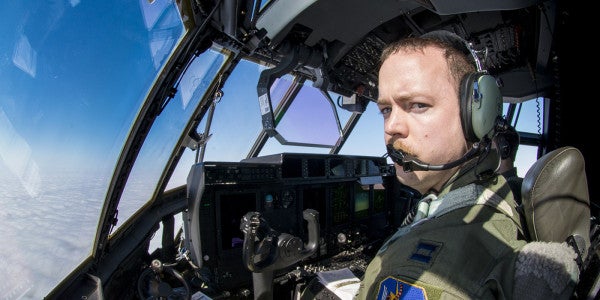 “Should we go with a 'fly-only' track?” Gen. Carlton Everhart II said in an interview Wednesday.

Everhart said he envisions something like this: “You stay with me for 20 years, and I let you fly. You … could maybe lieutenant colonel, but you may not make higher than that.

“To sweeten the deal, as you come into your career, maybe in the last four years, we allow you on a 'dream sheet' to put your top three choices, try to get you moved to there so you can establish your family and where you want to retire,” he said.

Everhart said the 'fly-only' effort would still encompass wing, squadron and group duties and deployments but — bottom line — “it's longevity.”

“The idea being explored is seeking airmen volunteers for a professional 'fly-only' aviator track comprised of anywhere from 5 to 10 percent of the AMC flying force,” said Col. Chris Karns, spokesman for the command, in an email. “This small group of airmen would be linked to flying jobs throughout a career.”

Everhart said his teams are looking at the program to establish more fixed methodology behind the effort, but would like to “look at it in the next three to four months” to begin a trial run.

“There's certain things we have to do to code these folks … and I've introduced the notion and got a tentative nod from [Air Force Chief of Staff Gen David Goldfein],” he said. “I think there's merit there, but I've just got to work all the way through it, then do the small group tryout and see where we go.

“I'm not taking anything off the table because I need them with me, I need them to fly with me,” he said.

Goldfein and Air Force Secretary Heather Wilson have said the service was 1,544 pilots short by fiscal 2016, which includes 1,211 total force fighter pilots — with the deficit expected to grow.

Airman feedback has resulted in one concrete move — the removal of additional duties, a common complaint.

In August, the service began removing miscellaneous responsibilities known as “additional duties” typically assigned to airmen at the unit level. It has since cut 29 of 61 additional duties identified under Air Force Instruction 38-206, “Additional Duty Management.”

“We're working hand-in-hand with headquarters Air Force A3 … so we don't get in crossways with each other, and can we, as solution sets, put these across the entire broad perspective of the Air Force,” he said, referring to Lt. Gen. Mark C. Nowland, head of operations, plans and requirements.

The groups established working areas, Karns said, that need critical attention, such as exploring ways to make a career in aviation more desirable; finding ways to reduce the cost of earning a civilian aviation certification — for example, a debt relief program; looking at enhanced data analysis to establish a baseline for what is actually required to meet national pilot need; exploring potential alternate pathways to becoming a pilot — possibly by accelerating timelines; and improving the effectiveness of “shared resources” of pilots who fly for both the military and commercial airlines.

“We've got another airline meeting coming up in September,” Everhart said, in which leaders will discuss the secondary phases for these working areas.

“We need to instill in the hearts of our American public what … aviation is all about,” he said.

“In an effort to extend the life service of various mobility fleets and enhance aircraft availability, we're looking to work with the Guard and Reserve to rotate aircraft more regularly and consistently to avoid disproportionate wear-and-tear on systems,” Karns said. “What has been known as enterprise fleet management is adjusting to what is called 'Total Force effort to sustain and modernize the fleet.' “

The system rotates aircraft from the three components more often in order to “shrink … and no longer have that airlift gap,” Capt. Theresa Izell, a maintenance officer, said in March during an AMC media day at Joint Base Andrews, Maryland.

Could that system be applied to the pilot gap — moving pilots flying various platforms throughout, or qualifying pilots to fly more platforms?

“I think you've got something there,” Everhart said. “I think we already do that with cross training. We do some cross training for airframes as far as pilots flying tankers versus cargo, but I have to explore that more. I haven't looked at it from the human dynamic prospect — and I think that's something to pull back . I love it.”

The number of pilots taking the aviator retention bonus for AMC has also slightly declined, Karns said. In 2015, the “take-rate” of pilots choosing the bonus and choosing to re-up into the Air Force was 56 percent; in 2016, that number dropped to 48 percent, Karns said.

“They stay in the military because what's in their heart, and their service to America. They really believe an American fighting force. That's why they stay,” he said.

“The bonus? Sure, that's sweet. But that's not why I stayed,” Everhart said. “I stayed because it's service to the nation. And that's what I'm finding out across the board” from other pilots.