The Air Force took his father, and Gerald Stephan wants him back. Stephan, 77, of Wooster, launched a campaign earlier... 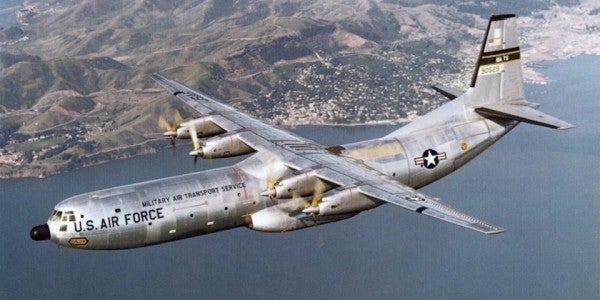 The Air Force took his father, and Gerald Stephan wants him back.

Stephan, 77, of Wooster, launched a campaign earlier this year to see if the government could recover the body of his father, Major Herman “Dave” Stephan, who was killed when the cargo plane he was piloting crashed into Pacific Ocean shortly after take-off from Wake Island in 1965.

However, that effort recently hit a roadblock when the U.S. Air Force and Defense POW/MIA Accounting Agency (DPAA) said they do not recover the remains of victims of non-combat missions.

Upon learning this news, Stephan was discouraged.

“This distinction between war deaths and mission deaths seems unfair,” he said. “Those who died a mission death have no advocate. Everybody in the military who has been killed overseas deserves to be brought home.”

Now, “realistically it looks like there is no place to go,” he added.

But he still hasn't entirely given up hope that recovery of the remains could be made, providing closure to a lingering and colorful saga of a veteran aviator's life and tragic death.

The type of plane that Stephan's father was flying, the C-133, was reportedly dubbed “the widowmaker” by some aviators due to its record of falling from the sky.

“We were told at the time that it was not recoverable,” Stephan said. “We all accepted it. That was just the way it was. We couldn't argue with it, so it wasn't like there was an option.”

But earlier this year he read a report about the Navy's interest in recovering one of its carrier planes that had crashed in the Pacific, killing three sailors, resting at a depth of about 18,500 feet.

Stephan said, “When I read that, I thought, whoa, this is amazing . . . this appears to be do-able at this point.”

Do-able, and suddenly important, even though his father has a grave (with no body) and a headstone at Arlington National Cemetery.

“You know, it's just something that always bothered me,” Stephan said. “The idea of my father being at the bottom of the Pacific Ocean just seems wrong to me.

“I think it would be somehow satisfying to at least have him back where we know where he is, and where the grandchildren can go to Arlington and see that's where their great-grandfather is.”

The family has always lived with the risks associated with flying.

Herman Stephan had been in aviation ever since he joined the Royal Canadian Air Force during World War II, though he was born in Montana. (The family had moved to Canada when he was 2.)

He switched to the U.S. Army Air Forces when America entered the war, and became a flight instructor for bomber pilots.

After the war he delivered air mail and barnstormed the countryside, giving folks a ride in his little three-seat Piper.

Gerald often went along for the tours and once saw his father crash.

“One weekend I was with him, just watching him, and he was taking people for a ride,” he recalled. “He came in on a farmer's field and hit a hole in the field or something, wiped out the landing gear, the prop and the airplane.”

His father wasn't injured, but there would be other close calls after he re-joined the Air Force during the Korean War and flew cargo flights between Japan and Korea.

Gerald Stephan said that one time his father was taking off in a refueling tanker loaded with aviation gas when fire broke out in a wheel well. His father turned the aircraft around, landed, and he and the crew escaped by climbing down a rope dropped from a cockpit window.

In another incident his father was flying a T-33 jet fighter trainer when the engine suddenly flamed out. Though advised to eject from the jet, the aviator was still able to bring it down safely.

So when Stephan's luck finally ran out in 1965, his son found it hard to grasp.

“I thought he was indestructible,” Gerald Stephan said. “And after this flight, it took me a long time to really come to grips with the fact that he was gone. I could not believe it.”

There were some prior, ominous clues.

The crash that killed Herman Stephan was the seventh of nine involving a C-133 Cargomaster after the new military turboprop transport started flights in 1957.

The crashes, attributed to several different problems, claimed some 55 crewmen before the C-133s were replaced in 1971.

The aircraft was designed to carry upwards of 110,000 pounds of cargo or a fully-assembled ballistic missile, but according to some reports had essentially gone from drawing board to production line with no prototypes built.

Gerald Stephan's sister, Darlene Lawson, of Taos, New Mexico, recalled, “We all had a feeling that dad didn't want to fly this plane. He said it was just so huge and hard to fly.

“We all kind-of felt something was going on with that plane because of all the crashes that happened,” she added. “It didn't sit well with any of us, and they didn't ground the plane.”

Gerald Stephan said he was surprised by a long-distance call from his father a few days before the fatal accident: “He said he was taking a flight out east . . . and he was flying the 133, and he said he didn't like the airplane. He said, 'You know Gerald, it just flies like a house.'

“I didn't realize at the time, but in hindsight I think it was his way of saying goodbye.”

There was another eerie farewell.

Roger Stephan, of Bellingham, Washington, was at home with his mother at the time of the crash.

He remembered waking up and hearing the initial news reports about the crash, and his mother telling him, “That's your dad's airplane.”

Stephan wondered how that could be, since the lost crew members hadn't been identified yet.

He recalled, “Mother said she woke up about midnight and saw Dave at the foot of her bed. He stood there and said, 'Everything will be all right, Anne,' then disappeared.

“I think that gave her an extraordinary amount of assurance, even though he died,” he added. “'Everything will be all right' was enough so she didn't go to pieces.”

He also recalled that his mother got a letter from a chaplain on Wake Island who had seen the plane go down.

“He was walking on the beach and literally saw the lights of dad's plane take off,” he said. “Then, at a certain point, he saw the aircraft veer to the left and sharply dive to ocean and explode on impact.

The back half of the plane had broken off, and the front part had fallen into a deep trench, according to Stephan.

Another one of the pilot's children is Janice Zerbe, of Colorado Springs, Colorado, who was only 7 years old when her father died.

“I just didn't understand the finality of death,” she recalled. “I always thought he would be discovered on a remote desert island . . . I just thought he was lost at sea and would turn up somewhere.”

Recovery of his remains would be important, according to Zerbe.

“If they realized the plane had problems, and put my dad on it, it's not right on any level,” she added.

To her sister, Darlene Lawson, a recovery provides a needed answer.

“Really. You don't see the body, you don't know if this really happened. In your mind, it's like, show me some proof,” she said.

“When I was younger I always thought maybe he wasn't really dead, that he was living another life somewhere,” she added. “I didn't get to go to his funeral or see him buried.”

The family said speculation has surfaced over the years regarding his death – questions of possible sabotage, defective engine bolts and intrinsic design flaws.

As part of his campaign, Gerald Stephan got in touch with Congressman Jim Renacci's office.

That office has contacted government agencies to provide the Stephan's family with the pilot's complete service record, and any medals he may have earned.

Stephan said Renacci's office also is checking into any possibility of a recovery operation.

A spokesperson for the DPAA said they could include that project as one of their missions if ordered to do so by the Secretary of Defense.

So for the moment, Gerald Stephan is still somewhat hopeful.

“I want to keep the door open,” he said. “You never can tell, even if some technological thing came along that made it more feasible. You never know.”

Roger Stephan said he harbors no resentment against the Air Force for the crash that occurred during the war in Vietnam.

“It's sad that we have to lose so many of our men in these situations,” he said. “At the same time I understand that war is difficult, and the types of equipment we put them in sometimes can be faulty.”

But to his brother Gerald, one “thing that's disappointing to me is this idea that the military had this plane that they knew was a death trap, and they kept putting people on it to fly it.

“I grew up in the military. I always had the greatest respect for the military,” he added. “But this has shaken my confidence in that whole world.”