Officials will immediately begin flagging those who have been unable to deploy for 12 consecutive months for separation consideration. 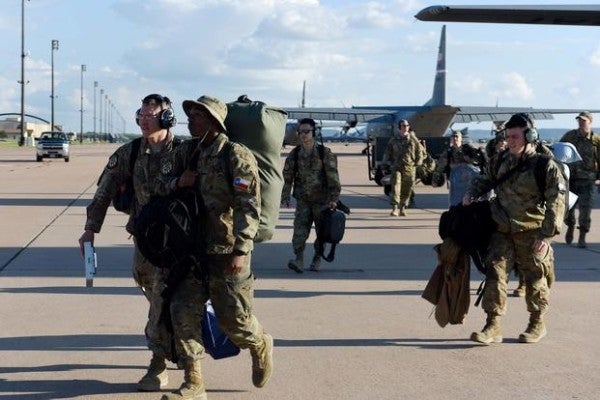 The U.S. Air Force has issued new guidelines for active-duty, reserve and National Guard airmen who are considered non-deployable, and officials will immediately begin flagging those who have been unable to deploy for 12 consecutive months for separation consideration.

In a memorandum signed Tuesday, the service said airmen who have been non-deployable for more than a year “will be notified by their chain of command and evaluated for retention either through referral to the Disability Evaluation System or consideration for administrative separation.”

“We expect all Airmen to exercise personal accountability for their deployable status and to take the necessary steps to maintain their readiness,” Chief Master Sergeant of the Air Force Kaleth O. Wright said in the memorandum, provided through a press release. “Commanders will ensure Airmen understand what is required and ensure the necessary resources are available to achieve our goal of a 95 percent or higher deployable rate within their units. The defense of our nation requires Airmen and the Air Force be ready to deploy at all times.”

Non-deployable airmen who hit the 12-month mark after the policy goes into effect Tuesday will be flagged for evaluation on a case-by-case basis.

“We as the Air Force are totally committed to a 95 percent deployable force,” said Scott Brady, assistant deputy for force management integration under the assistant secretary of the Air Force for manpower and reserve affairs. The Air Force worked with the Office of the Secretary of Defense to coordinate its guidelines.

“Having a ready and fit force is very important,” Brady said.

Last year, then-Defense Secretary Jim Mattis announced a new policy requiring each service to track and report non-deployable service members on a monthly basis to determine whether the troops were in a temporary or permanent status.

Between August and December, the Air Force had approximately 34,000 people who met the OSD non-deployable definition.

Many factors are considered in both categories.

Officials have said that it is difficult to pinpoint exactly how many service members are affected because the “temporarily non-deployable” list fluctuates on a daily basis.

The service estimates that only 0.5 percent of airmen will be affected by the new retention evaluation guidelines, but the percentage could be even lower due to additional exemptions already under consideration.

In total, fewer than 1,000 airmen will be affected by the change, officials said.

For example, the Pentagon has said exemptions will be given to those who are pregnant or postpartum. Other exemptions may include airmen “in a training or transient status, deployable with limitations or filling positions exempted by the Secretary of Defense,” the release said.

The Air Force has four prerequisites for airmen to be considered deployable, per the memo. An airman must:

Only Air Force Secretary Heather Wilson may veto retention requests for “combat-wounded Airmen who have been evaluated through the Disability Evaluation System and whose reason for being non-deployable is a result of their combat wounds,” the memo states.

All other cases will be reviewed by the Office of the Assistant Secretary of the Air Force for Manpower and Reserve Affairs for final approval.

Previously, the service gave commanders responsibility to identify whether an airman would be up for separation because of non-deployability.

The 12-month policy standardizes the process, the service said.

In October, the Air Force said it had “approximately 1,600” airmen who were expected to be affected by the new policy.

“It's important to understand this is not an automatic separation policy. It's a process, similar to what we already do today, that allows us to evaluate our non-deployable airmen to determine if their continued service is compatible with and can meet the requirements the nation expects of us as an Air Force,” Lt. Gen. Brian Kelly, Air Force deputy chief of staff for manpower, personnel and services, said in October. “The process we create will take care of all airmen while recognizing and ensuring we have a fair and equitable deploymentprocess across our Air Force.”

Career fields may also be evaluated with specific job requirements in mind.

Last February, Wilson said officials were just beginning to assess the small number of “non-deployable” career fields with an eye to being fair to those who execute a larger share of Air Force deployments.

Military instructors, Air Force musicians and others fall into the non-deployable category just by nature of their job.

“The Air Force has had … a lower percentage of non-deployable people than the other services, historically. We also have some career fields that don't deploy at all,” she said at the time. “I would expect we would try to implement it with two priorities in mind: one is the lethality and readiness of the force overall to be able to fight. The second is fairness.

“There is an argument that says if you've got 100 people that can do a job and 10 of them that are non-deployable, the other 90 are carrying the greater burden. If that's true, then we've got to do things that are fair,” Wilson said.

SEE ALSO: 'This Doesn't Change A Whole Lot': Pentagon Pushes Back On 'Deploy Or Get Out' Resulting In Mass Dismissal