A tornado rolled through Nebraska's Offutt Air Force Base last week and knocked out two of the service's 'doomsday planes,'... 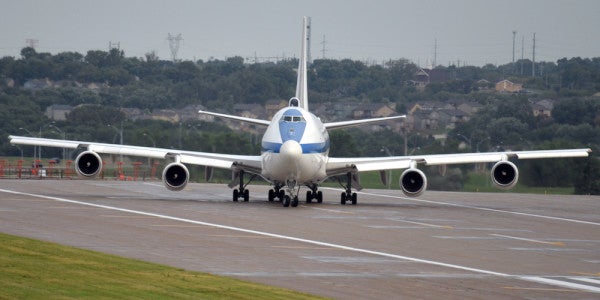 A tornado rolled through Nebraska's Offutt Air Force Base last week and knocked out two of the service's 'doomsday planes,' which the president would use for command-and-control if ground bases were ever destroyed.

Two out of the four Boeing E-4B 'doomsday' aircraft in active service were damaged on June 16, in addition to eight other planes at the base. Officials told NBC News that the two remaining aircraft can still do the job if needed.

“There is no impact to the E-4B's primary mission, so it remains capable of completing its National Airborne Operations Center,” Air Force spokesman Col. Patrick Ryder told CNN.

A militarized version of the Boeing 747-200, the E-4B is, in essence, a flying version of the Pentagon, with work areas, a conference and briefing room, and communications area, allowing the president and military commanders to issue orders from the air.

The aircraft has nuclear and thermal shielding and is protected from the effects of electromagnetic pulse (an after effect of nuclear weapons that disrupts electronics and communications equipment), according to an Air Force fact sheet.