The aviation world is abuzz with rumors that the U.S. Air Force is evaluating the purchase of a brand-new F-15X... 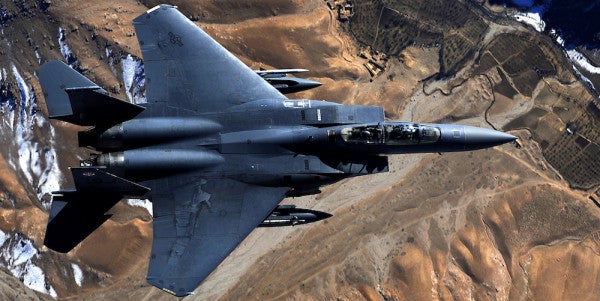 The aviation world is abuzz with rumors that the U.S. Air Force is evaluating the purchase of a brand-new F-15X model of the legendary 45-year-old F-15 Eagle twin-engine fighter. Marcus Weisgerber first reported this possibility for Defense One, then expanded upon in an article by Tyler Rogoway at The Drive.

Were a contract to materialize, the F-15X could become the Air Force’s first new fighter that wasn’t a stealth jet since 2001—paralleling a recent decision by the U.S. Navy to procure Super Hornet jets to serve alongside its F-35C stealth fighters, rather than allowing the F-35 to replace them. But just how significant are the upgrades, and do they justify purchasing more of the Air Force’s oldest active fighter plane?

The F-15X is specifically intended to replace a fleet of 235 F-15C and two-seat F-15D fighters deployed for air defense of the coastal United States, Japan and England. These air-superiority fighters are fast (Mach 2.5), maneuverable and boast long-range APG-63(V)3 radars. However, the F-15C/Ds date back to the mid-1980s and are quite likely to be retired early, as they would otherwise require expensive upgrades to remain airworthy.

Boeing proposes to manufacture new multi-role F-15Xs based on an advanced F-15QA Strike Eagle variant currently in production for Qatar. Because the factory line will remain open through 2022 and the technologies have all already been developed, Boeing could skip over the development phase and plans to offer the F-15X at a (presumably low) fixed cost—rare in an industry known for gigantic cost-overruns. The USAF, for its part, could inexpensively adopt a plane for which it already has existing infrastructure and familiarity.

Related: The F-15X Is The Missile-Hauler The Air Force Needs For A Stand-Off Fight »

Many F-15X improvements are sensible rather than slick, trading out the F-15C's 90s-era hybrid avionics for full fly-by-wire systems, modern digital displays and helmet-mounted sights. New strengthened wings and more fuel-efficient F110 turbofan engines would give the F-15X a remarkable 20,000-hour flight life, enough to last many decades of service. The new engines, which can be more cheaply maintained, also decrease the cost of operating an F-15X to $27,000 per flight hour from roughly $42,000. Rogoway claims this means replacing F-15C/Ds with Xs would pay for itself in ten years.

Several avionic upgrades would have tactical implications. A built-in Legion Pod carrying an IRST21 infrared-search and track system would outfit the F-15s with a high-resolution sensor with added utility against stealth aircraft. The Eagle’s dated TEWS defensive suite would be replaced with a digital Eagle Passive/Active Warning Surveillance System ( EPAWSS). Recently canceled for the likely-to-be-retired F-15Cs, EPAWSS would give Eagles a better chance to detect, jam and decoy new long-range anti-aircraft missiles.

F-15Xs would also be fully outfitted with new APG-82(V)1 Active Electronically Scanned Array radars. A variant of the powerful APG-63(V)3 radar outfitted on most F-15Cs, the APG-82 incorporates Radar Frequency Tunable Filters which allow the radar to simultaneously scan and jam at full efficiency and also features a digital maintenance capability that decreases upkeep requirements twenty-fold.

The most attention-grabbing upgrades on offer are quadruple-missile racks called Advanced Missile and Bomb Ejection Racks (AMBERs). The F-15C/D can only carry eight air-to-air missiles. With four AMBERS under each wing and another under its belly, an F-15X could potentially carry twenty long-range AIM-120D missiles plus two short-range AIM-9X missiles on wingtip rails.

The F-15X would also be capable of carrying air-to-surface munitions, and thus become a multi-role fighter capable of slinging up to twenty-eight GPS-guided Small Diameter Bombs plus air to air missiles, or a smaller number of larger munitions such as AGM-88 Anti-Radar missiles, JSOW standoff-range glide bombs, and even Harpoon anti-ship missiles.

While the F-15X concept has been warmly received in some quarters, fellow TNI writer David Majumdar offers a less flattering evaluation in this article by Zachary Keck: “It’s amazing this Boeing sales pitch is being swallowed hook, line, and sinker by the trade press . . . The Air Force will never buy this jet. It is useless inside heavily defended airspace if we are dealing with any sort of real military force.”

Undeniably, there is a commercial logic at play: though Lockheed has secured its long-term prospects with the F-35 stealth jet, Boeing seeks to divert defense dollars towards its fourth-generation jets, a tactic which has already paid off with new orders for fourth-generation Navy Super Hornets. The F-15X rumor purveyors stress it is meant to replace F-15Cs, not F-35s. However, funding would ultimately have to come from somewhere.

Though the F-35 program has suffered infamous cost overruns and delays, reports indicate unit costs are finally declining towards the target $85 million per plane, meaning the price differential compared to the F-35 could be modest, with an F-15X plausibly coming between $50 to $75 million). Still, the F-35 would remain considerably more expensive to operate with a current flight hour cost of $50,000 per hour.

Related: The F-15C May Soon Be Headed Into Retirement »

Majumdar correctly points out that the F-35 is more survivable against a capable opponent. Radar-equipped adversaries will detect an F-15 conspicuous profile from well over a hundred miles away and have a chance to shoot at or evade it, while an F-35 would be able to creep much closer. So are their roles an F-15X could perform more efficiently than an F-35 to justify maintaining them?

The F-15C fleet currently operates in the air defense/superiority role. Interceptors traditionally require long range, high speeds, heavy payloads and farseeing sensors to patrol large swaths of airspace and swiftly detect, close with and destroy as many incoming attackers as possible. Though the F-22 air superiority stealth fighter excels at this job, the standing force of roughly 120 combat-coded Raptors is too small and valuable to rely upon to do all the grunt work. The F-35, or the older, shorter-range F-16 , can perform this job but neither is optimized for it.

However, the Lightning does retain one killer advantage: adversaries likely won’t detect one coming until far too late. However, for peacetime or lower-intensity air defense purposes (think the conflict over Syria), a stealthy airframe might not always be desirable. For example, it might be preferable to chase off a bomber before it releases weapons than destroy one after it has launched its payload.

Furthermore, unlike the F-15C, the F-15X would also be a multi-role jet that could supplement the F-15E Strike Eagle fleet on surface-attack missions. However, Eagles would not be able to penetrate defended enemy airspace like the F-35 could—and both Russia and China have developed dense integrated air-defense networks to deny large swathes of airspace. In a high-intensity conflict, that would limit the Eagle to defensive roles and to nibbling at the edge of defended ’bubbles’ with stand-off weapons until air defenses are suppressed. In permissive environments where air defenses are minimal, however, the F-15X might be a more efficient strike platform than the F-35.

The F-15X’s greater payload could open interesting strategies when working together with F-35s and their networked sensors—an approach the Navy plans for its own mixed Carrier Air Wings of Super Hornets and F-35s. As noted earlier, the F-35 is limited to carrying just six to eight missiles when in stealth mode, which could leave it overwhelmed facing a numerically superior adversary. An F-35 could creep closer to scout out the positions of enemy air or surface forces with its sensors and relay the targeting data to F-15X ’missile trucks’ loaded down with long-range weapons flying a safer distance away from enemy forces. This strategy could also be inverted: an F-15X could use its powerful radar to vector F-35s running ‘silently’ with their active sensors off until they have stalked close enough to their prey to have a higher probability of a kill.

In general, a fast, long-range and heavy-lifting platform like the F-15 Eagle could be useful for deploying heavy payloads ranging from electronic warfare pods, anti-satellite or ballistic missiles systems, hypersonic missiles to drone swarms. However, the Air Force already intends to maintain over 200 F-15E Strike Eagles that could also perform these roles. Therefore, the real question is effectively whether to roughly double the number of multi-role Eagles in the Air Force inventory, or simply retire the air superiority types.

The worthwhileness of the F-15X concept comes down to whether you believe the Air Force should pay to maintain a lower-tier force of cost-efficient fighters to handle missions that don't require the F-35's special capabilities, namely air defense of coastlines, munition hauling, and ground support in semi-permissive environments. However, those more preoccupied with high-intensity conflict scenarios with China or Russia will likely feel more skeptical of diluting the F-35 force to purchase older, less survivable jets.