“Most of my time was spent with my birds,” said Compton, who has been a licensed falconer since he was 16 years old. 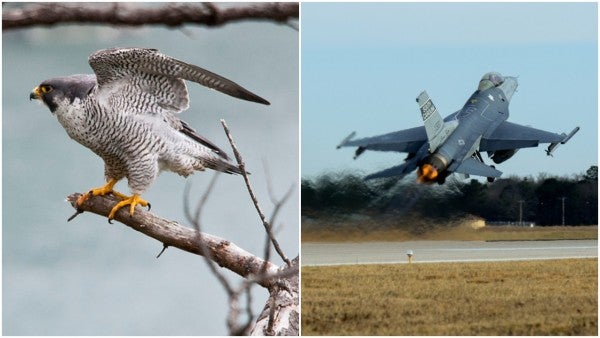 As a pilot in the US Air Force, Art Compton flew F-106 and F-16 jets. But Since his retirement from the USAF, Col. Compton, 70, has had more time to work with birds of a different feather, specifically peregrine, merlin and kestrel falcons.

Compton graduated from New Trier High School, in Winnetka, Illinois, in 1967, where he played on the prep school’s soccer team. But his true passion was birds.

“Most of my time was spent with my birds,” related Compton, who has been a licensed falconer since he was 16 years old.

His other interest was flying, inspired by his father, Charles Compton.

“My dad was a pilot during World War II, and I used to fly with him on weekends as a boy,” Art recounted. “He still lives in my hometown, and will be 104 this month.

Compton graduated from U.S. Air Force Academy in Colorado Springs, in 1972, followed by flight training at Columbus (Mississippi) AFB. He then stayed on as a Northrup T-38 Talon instructor pilot until 1976.

Next, Capt. Compton flew the EB-57E out of Great Falls’ Malmstrom AFB, including tours to Germany, Italy and Denmark.

Related: The Air Force wants to use falcons To punch drones out of the sky

When his hitch was up, he went back to grad school at the University of Montana, obtaining a MS in environmental planning in 1984. Compton was assigned to Domestic Air Defense Alert duty from 1979-96, with the Montana Air National Guard 120th Fighter Wing at Great Falls International Airport. He piloted the Convair F-106 Delta Dart until 1987, and then the unit transitioned to the F-16 Fighting Falcon.

As a MANG major, he performed drug interdiction deployments to Panama (1990) and Puerto Rico (1992), as well as intercepting and escorting Ukrainian MiGs into the country on their first visit to the U.S. after the fall of Soviet Union.

“In August of ‘92, the newly sovereign nation of Ukraine painted the MiG-29 Fulcrums that now belonged to them in their national colors, and embarked on a good-will tour of the west,” Compton related. “My 120th FW wingman, John Jensen, and I intercepted the MiGs in our F-16s over British Columbia and escorted them into Geiger Field in Spokane.

“We spent a couple of days as the Ukrainian pilots’ hosts there, before escorting them to their next stop in Rapid City. They were fine gentlemen and proud patriots of their new nation.”

Compton obtained the rank of lieutenant colonel in about 1994, and he retired after 30 years in the military as a full bird colonel in 2002.

His civilian career was composed of working on environmental issues for public and private sector organizations, including Hydrometrics Inc., and the Montana Departments of Natural Resources, and Conservation and Environmental Quality.

Art and his wife Linda have two sons, Luke and Alex, and two grandchildren. In retirement, Compton returned to his roots – soccer and birds. For the past 18 years, he has served as a Helena club and high school pool soccer official, as well as a Helena High girls assistant coach and Arsenal coach, for 14 and eight years, respectively.

Related: The Marine Corps had to hire a falconer to keep seagulls from harassing recruits at boot camp

He’s also been a volunteer at Montana Wild for three years, “spending time with my birds again, including falcons, eagles, hawks and owls, as well our bears, wolves, coyotes, foxes…the list is endless.”

Compton was recently recognized by the U.S. Air Force Academy for his volunteer hours at Montana Wild, receiving the “Service Before Self Challenge” and “USAFA Grads Giving Back” awards.

But back to the skies…

Compton said he flew at speeds up to about Mach 1.5 during his career, which is equal to about 900 MPH at high altitudes. And speaking of altitude, he recalled the highest he’s ever flown was about 48,000 feet. “You’re limited at 50K without a pressure suit,” he noted.

Over his lifetime, Compton has amassed about 5,500 hours of flying time. And when asked if he ever crashed, he answered nonchalantly, “Well, I sheared the nose off a 106 on an emergency barrier engagement one night, but nothing serious.”