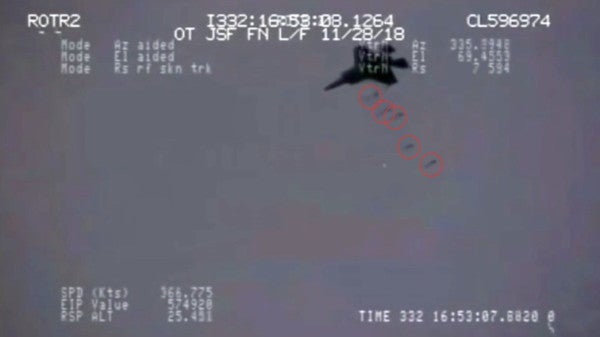 In an event two decades in the making, the Air Force's variant of the F-35 has finally flown its first combat mission.

No information was immediately available on Tuesday about how successful the strike was.

While the mission marks a milestone in the F-35's long development, it also begs the question: Why is the Air Force using its most sophisticated and expensive aircraft, which is designed to penetrate advanced Russian and Chinese air defense systems, to blow up a cave?

“The F-35A has sensors everywhere, it has advanced radar, and it is gathering and fusing all this information from the battlespace in real time,” Lt. Col. Yosef Morris, 4th Fighter Squadron commander, said in a news release. “Now it has the ability to take that information and share it with other F-35s or even other fourth generation aircraft in the same package that can also see the integrated picture.”

Monday's mission comes after a Marine Corps F-35 squadron bombed both ISIS and the Taliban last year while deployed aboard the amphibious assault ship USS Essex. Before that, Israel became the first country to use the F-35 in combat last May when its version of the Joint Strike Fighter conducted airstrikes in Syria.

The F-35As that flew Tuesday's strike were with the active-duty 388th and reserve 491th Fighter Wings, which arrived at Al Dhafra Air Base, United Arab Emirates, for a training exercise.

It is possible the F-35As will fly more combat missions during the remainder of their time in the U.S. Central Command region, a U.S. official said on Tuesday.

SEE ALSO: Acting SecDef Shanahan thinks the F-35 program is 'f–ked up' just like everyone else