Air Force F-35 pilot on flying the legendary A-10: ‘like Chewbacca with chainsaw arms’

​The A-10 is a flying death machine, a plane built around a cannon that is capable of firing 4,200 rounds per minute and eliminating anything in its path, but this fearsome gunship's days are numbered. 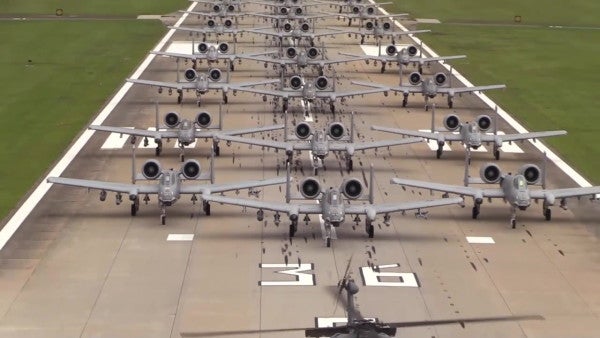 The A-10 is a flying death machine, a plane built around a cannon that is capable of firing 4,200 rounds per minute and eliminating anything in its path, but this fearsome gunship's days are numbered.

Some U.S. Air Force pilots are currently transitioning to flying other aircraft, like the new F-35A Lightning II Joint Strike Fighters that are supposed to replace many of the A-10s for ground attack missions.

Here's what one pilot had to say about the shift during the Air Force's Red Flag air combat exercises.

Captain James Rosenau, a former A-10 Thunderbolt II pilot, described the transition from the Warthog to the stealth fighters in an interview with the Air Force.

“I loved the A-10 and its mission,” he told the Air Force, “It's like a flying tank. Like Chewbacca with chainsaw arms. A very raw flying experience. Obviously, the F-35 is completely different. It's more like a precision tool.”

Chewbacca, Han Solo's beloved co-pilot from the “Star Wars” movies, was a creature known as a wookie that was a physical beast. Nobody wanted to mess with Chewie.

The A-10, a gunship famous for the “BRRRT” of its 30 mm GAU-8/A seven-barrel Gatling gun, was the first Air Force aircraft built specifically to provide close air support to ground forces.

The F-35As are expected to eventually replace the older F-16 Fighting Falcons and A-10s.

“In the A-10, I liked being the guy who was called upon to directly support troops on the ground. To bring that fight to the enemy,” Rosenau said. “Now I like being the guy who can support legacy fighters when they may be struggling to get into a target area because of the threat level.”

The F-35 is designed to provide advanced capabilities to defeat emerging threats from near-peer competitors like China and Russia, but some observers and lawmakers are skeptical that the F-35A is a suitable replacement for the A-10's formidable ground-attack capabilities.

Rosenau spoke highly of the embattled fifth-generation fighters, saying, “After seeing the F-35 go up against the near-peer threats replicated here at Nellis [Air Force Base in Nevada], I'm a big believer.”

Red Flag is the Air Force's top air combat exercise. Over a three-week period, pilots from the U.S. and allied nations square off to strengthen interoperability and improve combat readiness.

WATCH NEXT: A-10 Warthogs Practice Rough Landings In Estonia