The Air Force faces many millions of dollars in potential liability for the mass shooting at a small-town church in... 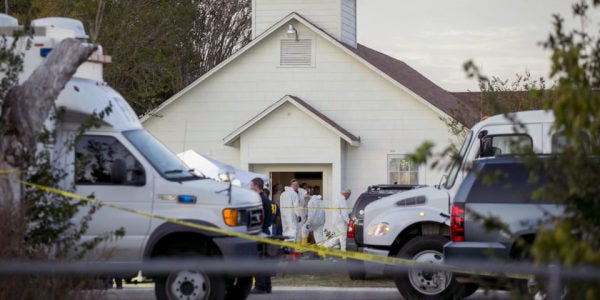 The Air Force faces many millions of dollars in potential liability for the mass shooting at a small-town church in Texas earlier this month by a former servicemember, legal experts say.

“I think it’s almost inevitable that the Air Force will be sued,” said retired Lt. Gen. Richard Harding, former judge advocate general of the service. “And I think there’s a case that can be made, you bet.”

If lawsuits against the Air Force were successful, said Don Christensen, the service’s former top prosecutor, the damages could be huge.

“What is being shot while you’re in church, watching your baby be killed — what’s it worth?” Christensen said. “I don’t see how it’s not the biggest financial payout in the history of the Air Force.”

U.S. laws rarely provide for victims of gun violence to seek compensation in civil lawsuits, and the doctrine of sovereign immunity prevents many lawsuits against the government. But this case is exceptional, experts said.

Devin Kelley, who killed and injured scores of parishioners on Nov. 5 in Texas’ worst mass shooting, was convicted of domestic violence assault in 2012 while in the Air Force. Under a 1996 law precluding spouse and child abusers from possessing firearms, the service’s Office of Special Investigations should have entered that conviction into an FBI database.

The office didn’t, the Air Force has acknowledged. What’s more, the acts Kelley pleaded guilty to — breaking his baby stepson’s skull and hitting and kicking his then-wife — were punishable by imprisonment of more than a year. That qualifies them as felonies, which must be entered into the database.

Having cleared an FBI background check, Kelley bought an AR-556 rifle from a San Antonio gun store that authorities say he used to kill 25 people, including numerous children and a pregnant woman, and wound 20 more.

The military’s failure to enter Kelley’s conviction potentially constitutes negligence. Lawsuits against the government claiming negligence are allowed to proceed in court.

Law enforcement officials work the scene of a shooting at the First Baptist Church of Sutherland Springs, Monday, Nov. 6, 2017, in Sutherland Springs, Texas. A man opened fire inside the church in the small South Texas community on Sunday, killing more than 20 and wounding others.Photos via Associated Press

“We believe there’s a good legal claim against the Air Force for their failure to report,” said Jamal Alsaffar, a partner in an Austin, Texas-based law firm that has won many millions of dollars in damages from the military, most of them in medical malpractice suits. “Had they done so, Kelley would not have been able to purchase the weapon he used.

“This was an obvious duty to report foreseeable danger. They had unique access to report, they didn’t, and I would like to know why.”

The Federal Torts Claims Act prevents lawsuits against the government for harm resulting from discretionary or policy decisions. For example, the commanding general who allowed a jury rather than the judge to sentence Kelley — resulting in his getting only a year in prison and a bad conduct discharge rather than a more appropriate longer sentence and dishonorable discharge — was “an incredible fool,” Christensen said. “But you couldn’t sue him for that because that was discretionary.”

But reporting the case to the FBI database was not discretionary. “It was required by law,” Christensen said.

Plaintiffs in FTCA cases must also show that the harm caused by the negligence was foreseeable.

”I think it’s clearly foreseeable Kelley would commit an act of violence. The threats he’s made against his wife and his commanders — they knew that,” Christensen said.

OSI also was aware of allegations that Kelley had pointed a gun at his wife and had access to weapons, even though that charge had been dropped as part of a plea agreement.

Harding said that Air Force officials for at least a decade had been talking seriously about the importance of entering domestic violence convictions into the FBI database and that it wasn’t clear why that hadn’t been done.

“If he’s assaulted his wife and broke the skull of his stepson … why would they not follow the rules?” Harding said. “How much do they care about it?”

At the end of last year, the Defense Department had only one domestic violence conviction in one of the FBI’s main gun background check databases, according to FBI records. Nearly 11,000 dishonorable discharge records — another category that precludes firearms possession — were entered.

“It’s the Air Force that’s on the hook, but it appears all the other services had issues,” Harding said.

The Air Force and the Pentagon have recently initiated audits to determine if other required records of domestic violence and felony convictions have been entered into other FBI databases. If they haven’t and the services was entering only dishonorable discharge records, thousands of servicemembers and former servicemembers could be illegally buying firearms.

Survivors and family members of those killed at the church can’t go directly to court but must first bring an administrative claim against the Air Force. Cases can be resolved at that point.

If the claim is denied or a settlement amount isn’t agreed on, plaintiffs would then file in a Texas federal court within two years of the incident.

Christensen said it’s likely that the Air Force would try to settle early on. “First, it’s the right thing to do,” he said, and would spare families from a painful trial process.

“Second, the last thing they’d want is for this to be in court,” he said. “They’d be open to discovery and a lot of things would come to light about their cavalier attitude. And there’s the potential for a huge payout, depending on Texas law,” he said.

Federal law precludes punitive damages in these cases. But plaintiffs may get damages for loss of companionship and pain and suffering, in addition to compensation for loss of income and medical and burial expenses.