Editor's Note: This article originally appeared on Business Insider. The U.S. Air Force is building a modular field hospital at... 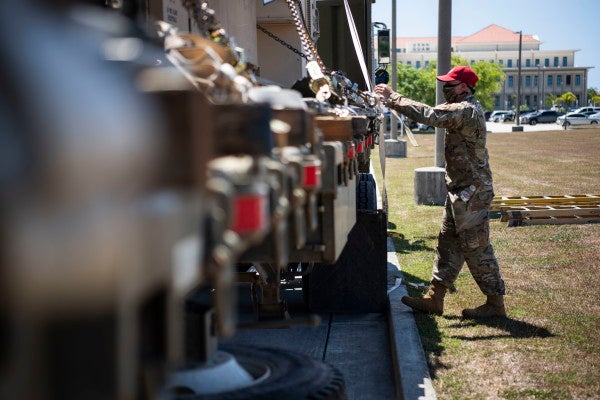 The Navy has tested 94% of the carrier's sailors, and 678 have tested positive. In response to the outbreak aboard the ship, 4,069 sailors have been moved ashore in Guam, where the USS Theodore Roosevelt has been sidelined for weeks.

To augment current capabilities, the 554th RHS of the 36th Contingency Response Group, 36th Wing at Andersen Air Force Base, with the support of Joint Base Elmendorf-Richardson in Alaska and Hickam Air Force Base in Hawaii, are setting up an Expeditionary Medical Support System.

The bases in Alaska and Hawaii have been flying in necessary medical supplies.

The EMEDS is being constructed on the grounds of US Naval Base Hospital Guam and consists of 11 medical units and 6 warehouse units. Staffed by Air Force personnel, the facility will provide 25 beds for the treatment of infected individuals.

Construction of the facility started a couple of days ago and is nearly complete.

“This project will directly support military efforts to get the crew of the USS Theodore Roosevelt healthy and back out to sea, but will also give U.S. Naval Hospital Guam capability to further support the Government of Guam's medical capacity in the island-wide fight against COVID-19,” the Air Force said in a statement.

While more than half of the coronavirus cases among sailors assigned to the USS Theodore Roosevelt have been asymptomatic, others have experienced mostly mild to moderate symptoms. In some cases, though, the symptoms have been more severe.

There are currently eight sailors in the hospital, with one in intensive care. One sailor who was placed in intensive care on April 9 after being found unresponsive in isolation died last Monday of related complications.