An Air Force F-15 pilot, Capt. Eric Straub, proposed to his girlfriend over the weekend, Today.com and multiple other outlets... 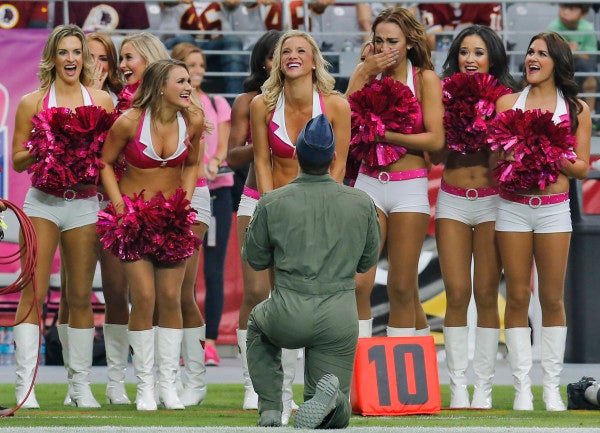 An Air Force F-15 pilot, Capt. Eric Straub, proposed to his girlfriend over the weekend, Today.com and multiple other outlets report.

This, in and of itself, isn’t news. It’s the military, people get married every 32 seconds, according to statistics I recently made up.

But Straub’s new financee, Claire Thorton, is a cheerleader for the Arizona Cardinals. And Straub went all out for the proposal, donning his flight suit and dropping to one knee on the sideline of the Cardinals game against the Washington Redskins.

“It was so loud you couldn't hear anything,” Straub told Today.com. “I had all these things I wanted to say, but once I got down on my knee, I had no idea what to say. I think all I said was, 'I love you marry me!' It was funny.''

“Claire had no idea what was going on,'' Straub told TODAY.com. “I just wanted it to be special for her, and I wanted her to be surprised.”

According to Today.com, Straub had just returned from a deployment to the Middle East. As we’ve previously reported, Straub’s aircraft, the F-15E Strike Eagle, has been an active participant in the campaign to defeat the Islamic State of Iraq and Syria.

The couple went to high school together, and had been dating for about a year.