The Air Force Gunsmith Shop has completed delivery of the 2,700 GAU-5A Aircrew Self Defense Weapon, a 5.56mm carbine that can be quickly assembled in emergency situations 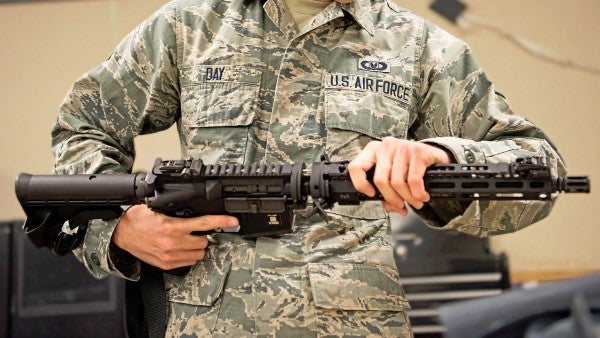 The Air Force Gunsmith Shop has completed delivery of the 2,700 GAU-5A Aircrew Self Defense Weapon, a 5.56mm carbine that can be quickly assembled in emergency situations, according to a recent Air Force news release.

“We were asked to design a stand-off weapon that was capable of hitting a man-size target at 200 meters,” Richard Shelton, chief of the Gunsmith Shop, said in the release. “It disconnects at the upper receiver …… and can be put together within 30 seconds if needed.”

The $2.6 million weapon program was developed to meet an urgent operational need to increase downed aircrew survivability, the release states.

Air Force officials announced the program in June 2018 to give pilots a more capable self-defense weapon if downed in enemy territory. In the past, aviators were armed only with a pistol and maybe a knife for protection.

The new Aircrew Self Defense Weapon is based on the M4 Carbine, and weighs under seven pounds. It's designed to fit inside the seat kit of ACES 2 ejection seats, according to the release.

The GAU-5A features a quick-connector barrel and handguard assembly that attaches to the upper and lower receiver of the weapon. The M4 carbine also breaks down into two main components. Two pins disconnect the M4''s upper receiver from the lower receiver and barrel assembly.

The GAU 5A's pistol grip is designed to fold back against the collapsible buttstock to save space when stowed. It also features folding front and rear iron sights, replacing the standard M16-style A-frame front sight.

GAU-5A Aircrew Self Defense Weapon is a 5.56mm carbine designed to break down and fit inside a seat kit attached to ejection seats. (U.S. Air Force photo)

The Air Force Gunsmith Shop is part of the Air Force Life Cycle Management Center's Armament Directorate and was formed in 1958. Both military and civilian gunsmiths repair and refurbish all small arms for the Air Force, from pistols to .50 caliber machine guns, according to the release.

“The most rewarding part of my job is getting through the shop and taking a weapon that has been beat up and heavily used, and returning it to the user practically brand new,” Shelton said. “”The other rewarding thing is when we work with the using community to develop specific weapons for a specific Air Force need.”

The Army awarded Sig Sauer an MHS contract worth up to $580 million in January 2017. The 10-year MHS agreement calls for Sig Sauer to supply the service with full-size M17 and compact M18 versions of its 9mm pistol.

The striker-fired MHS pistols can be outfitted with suppressors and come with 17-round and 21-round magazines. There is also an accessory rail for mounting accessories such as weapon lights.