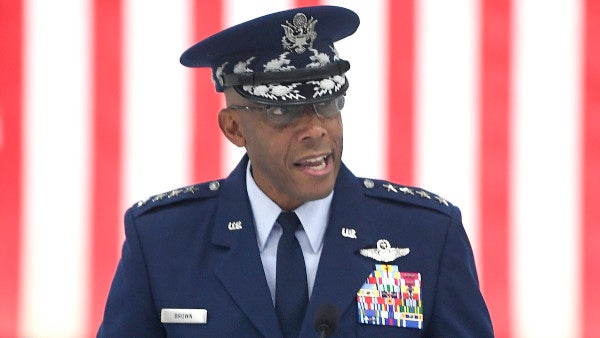 In his first strategic message to the Air Force, Chief of Staff Gen. Charles “CQ” Brown is pushing for radical changes, saying the service must rethink its internal structure to better align with how airmen deploy around the world, and ditch unnecessary or aging equipment that can't give airmen the advantage on the battlefield.

In his paper, “Accelerate Change or Lose,” distributed to airmen Monday, Brown said the window of opportunity to adapt to a changing battlefield continues to shrink, which is why airmen need to address challenges — from the novel coronavirus (COVID-19) pandemic to emerging threats from a resurgent Russia or China — head on.

“If we don't change — if we fail to adapt — we risk losing the certainty with which we have defended our national interests for decades,” Brown said. “We risk losing a high-end fight. We risk losing quality Airmen, our credibility, and our ability to secure our future.”

“It's an opportunity to give us some options and some flexibility to be adaptive, and to accelerate changes,” Brown added during a phone call with reporters Monday.

“You want to train like you're going to fight, and from that aspect, [we've got] to take a look at ourselves … and figure out what may be the best model that provides a level of readiness relative to direct force and how we are organized at home station,” he said.

Some recent Air Force efforts have embraced this idea, Brown said. For example, the service in 2017 introduced the “deployed teaming” concepts, or to dispatch airmen who previously deployed on individual taskings as part of teams of three or more.

Like aircraft platforms that now face retirement, programs that are “broken,” aging, or that don't offer a competitive edge against near-peer aggressors, must also be reevaluated, Brown said.

Specifically, “Programs that once held promise, but are no longer affordable or will not deliver needed capabilities on competition-relevant timelines, must be divested or terminated,” he said in the paper. The recommendation follows moves by the Army and Marine Corps to ditch some legacy systems to pay for capabilities designed for a future high-end war.

During the phone call, Brown did not offer examples of what those programs may be, but said the service is assessing where it can take risks as it moves forward.

“We must be able to account for the interactive nature of competition and continuously assess ourselves relative to our adversaries' adaptations,” he said. “Capabilities must be conceived, developed, and fielded inside competitors' fielding timelines — knowing we will need to adapt and adjust over time.

“Likely future budget pressures will require the most difficult force structure decisions in generations. We cannot shy away from these decisions,” he said, adding the service must be fiscally responsible of taxpayer dollars.

Brown most recently led Pacific Air Forces, where he oversaw more than 46,000 airmen operating out of Japan, Korea, Hawaii, Alaska and Guam. The job afforded him a chance to closely observe China's military buildup on contested islands within the South China Sea. He also led the air campaign against the Islamic State as head of Air Forces Central Command.

In his paper, Brown emphasized that a “good enough today” mentality will not prevail in a future fight with an adversary, particularly on those, like China, that have developed their capabilities while the U.S. focused on counterinsurgency missions in the Middle East.

“We must be prepared to address our competitors' attempts to hold the U.S. Homeland at risk with unconventional, conventional, and even nuclear force,” Brown said. “As a Service, decisions on our missions and capabilities must be informed by how they fare against our understanding of competitors' theories of victory, ways of war, and force development strategies.”

Brown focused on China as a rapidly changing threat aiming to eclipse America's standing on the global stage. As the PACAF commander, Brown last year said the Air Force should pursue different avenues, such as evasive or deceptive measures, to stifle competitors including China, instead of always relying on its most expensive weapons as a deterrent.

Brown in his document that these tactics are especially vital in an “environment that includes, but is not limited to, declining resources, aggressive global competitors, and rapid technology development and diffusion.”

Therefore, “the U.S. Air Force must accelerate change to control and exploit the air domain, while also underwriting national security through nuclear deterrence to the standard the nation expects and requires.”

Like his predecessor, now-retired Gen. David Goldfein, Brown described the task at hand as a “journey,” one that should leverage partnerships with sister services like the newly created Space Force, partners and allies, and industry.

“I can't do this alone; the aspect of this is, we are in competition in our national security and it doesn't end after my tenure or for several chiefs of staff after me. And so we're going to be thinking about this on a regular basis,” he said during the call.

Like Goldfein, Brown said the service must rely on those in the ranks, empowering them to make decisions and preparing them for more expeditionary deployments. The future environment will require multi-capable airmen with fundamental skills who react nimbly in fast-paced situations and who “demonstrate value in the diversity of thought, ingenuity, and initiative,” he said.

As a whole, the service “has got to move faster,” Brown said Monday.

“We got to move at the pace, at least the same pace that our adversaries are moving — and so that's why we've got to adjust … and be willing to change and ready to change in the same way,” he said.