She once was barred from fighter jets. Now she’s the Pentagon’s only female four-star

"Don't let anyone tell you that you can't do it." 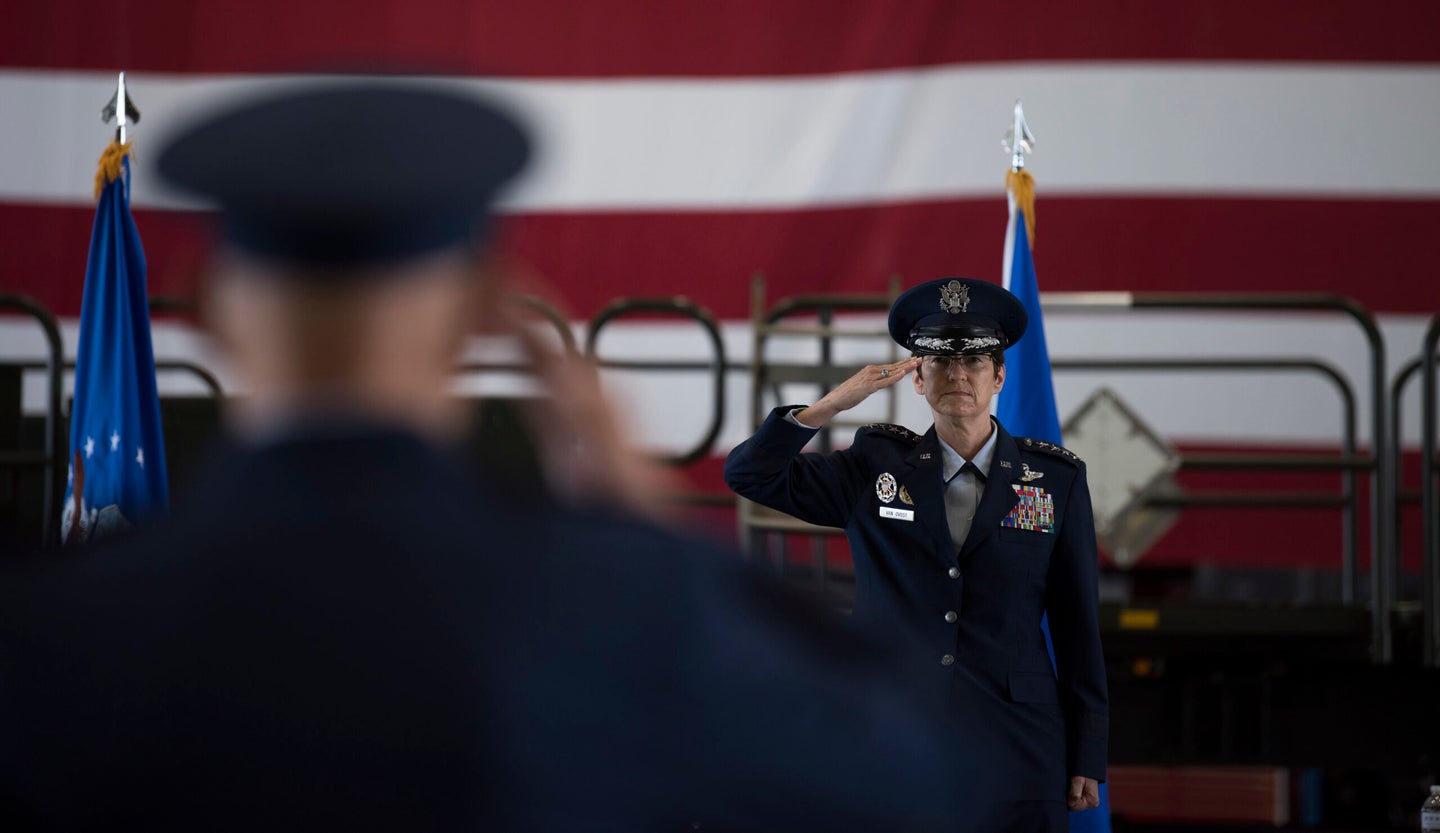 It was the morning of June 18, 1983. Jacqueline Van Ovost, just 17 at the time, got up early to witness history in the making.

She flew her father's Cessna 172 Skyhawk up the coast from Fort Pierce to Melbourne, Florida, roughly 25 miles from Cape Canaveral, where Sally Ride was about to embark on NASA's seventh shuttle mission and become the first woman in space.

Donning her blue “Ride, Sally, Ride” T-shirt in the cockpit, Van Ovost circled in the sky for most of the morning in a holding pattern as the space shuttle Challenger prepared for liftoff, finally streaking across the sky.

Van Ovost, now an Air Force four-star and head of Air Mobility Command, kept that T-shirt for the next 30 years, partly to celebrate Ride's momentous achievement — but mostly because it symbolized opportunity for women just like her.

“She made that much of an impression on me,” Van Ovost said in an interview Thursday, adding that she never had the chance to meet Ride in person. “At the time, I was in Civil Air Patrol, and I couldn't stop talking about what the possibilities for any woman were at that point.”

Today, Van Ovost is the Pentagon's only female four-star general, and the fifth in the Air Force's 73-year history. She's been a test pilot; commander of a refueling squadron, a training wing and an airlift wing; and the head of the C-17 Globemaster III program at the Pentagon. She has served as the vice director to the Joint Staff, among many other postings following her graduation from the Air Force Academy in 1988.

But she doesn't think of herself as a trailblazer.

“Frankly, I never wanted to be 'the first,'” she said. “I've been fortunate that other people have broken those glass ceilings and I've been able to blaze right behind them and widen the trail.”

Despite early strides, women like Van Ovost faced substantial barriers. For example, the Pentagon did not lift a decades-long policy that prohibited women from flying in combat until 1993.

While she desperately wanted to fly at Mach 1 fighter speeds following undergraduate pilot training, she was instead assigned to the C-141B Starlifter, a cargo plane. But in 1993, she took a reassignment opportunity to become one of a few female test pilots at Edwards Air Force Base, California, flying aircraft such as the A-10 Thunderbolt II — a favorite — and the first iteration of the C-17 cargo aircraft.

“I did a lot of dirt testing, which is dirt takeoff landing performance and a lot of airdrop and personnel drop testing, and heavy equipment loads,” Van Ovost said. “I thought to myself, 'This is an expensive airplane to put in a dirt field, to place in harm's way' and then, when Operation Iraqi Freedom came along, we used the airplane to come in from the north and do airdrop and air land into dirt strips. … I thought to myself, 'Wow, I was part of that.'”

The C-17 is considered the backbone of airlift operations for the Air Force, despite being plagued with production issues early on. Now, the service is looking beyond its decades-old equipment as it plans for the future battlefield.

“What we do is a bit of physics, right?” Van Ovost said of the AMC mission.

“We physically move people. We move pallets, equipment; we move energy or gas. We open airfields and nodes, and we move patients. In the end, we have to do physics to ensure that the joint force can compete, deter and win, but what we're going to be focusing more on now are the capabilities necessary to ensure that we can make better decisions before we have to start doing the physical role. Meaning, what are we doing with data? How are we making precise decisions with respect to how we deploy, distribute, sustain and maneuver the force?”

She added, “We are on that trajectory, but we need to focus a little more and accelerate into areas that we traditionally don't think about, like [how to connect] the force, and operations.”

For outside-the-box thinking, Van Ovost is looking to airmen from diverse backgrounds.

“When people think about it in different ways, you want a bunch of diverse people around the table contributing to that solution,” said the general, who recently sat on the Department of the Air Force's Barrier Analysis Working Group within the Women's Initiative Team. That team was instrumental in amending the service's cockpit height restriction policy, removing its minimum height requirement for officer applicants, as well as allowing some pregnant female pilots to stay in the cockpit longer without need of a medical waiver.

The service is moving to topple entrenched barriers and getting after biases that still perpetuate in its culture, Van Ovost said.

“I'm all for it,” she said of the policy changes, such as the height restriction reversal. “If it still maintains a military decorum, we still achieve commander's intent, and we do no harm, then why wouldn't we?

“I'm pretty proud of the Air Force for moving out as quickly as we have. But we're not there yet,” she said.

As a captain, Van Ovost said she made sure to act as a mentor or a guide in some way as more and more women came into the ranks — especially during her test pilot days when women were few and far between.

Male pilots viewed them as less capable, she said. When she eventually became an instructor, she wanted to instill into female pilots' minds that they were just as ready as the guy next to them.

“I wanted to make the path wider — not necessarily easier — but wider, with greater opportunity and [fewer] barriers,” she said.

Her main message for women in the service? “Don't let anyone tell you that you can't do it.”

“It's that imposter syndrome [mentality], the small voice that you think you have in your head that says, 'You're not good enough, and even though some other person has done it, you are not as good as they are.' It's real and it can be paralyzing,” Van Ovost said. “I don't think that men often have that kind of inner conflict.

“So, [know that] 'I can reach for that knob, and I can go and try to be in the E-ring if I wanted to,” she said, referencing the top leadership offices inside the Pentagon.

A reach-for-the-stars mindset is critical not because it produces history makers, but because it drives airmen to become force multipliers, championing those around them, she said.

“It doesn't matter who they are or what career field, civilian or military,” Van Ovost said. “They're the ones to help with who you're going to be. It takes a village to raise a child, right? It takes all sorts of people to raise the right leader.

“The people who blazed the trail, the people who opened the door, those are the two most important; [but] the third most important is the one that walks beside you, and coaches you along the way and says, 'You know what? You can do this,'” she said.