The Block 30 model marks "a major improvement in software and avionics technology" over the original Block 20 software AC-130J, the release states. 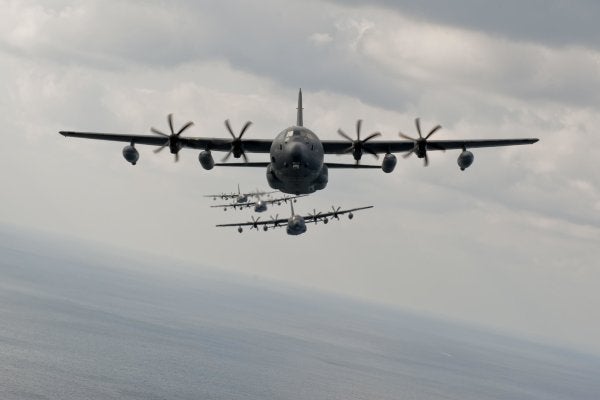 The Air Force has received an upgraded version of its Ghostrider gunship.

The Block 30 model marks “a major improvement in software and avionics technology” over the original Block 20 software AC-130J, the release states.

“The Ghostrider is the newest and most modernized gunship in existence, fulfilling the same mission sets as the Spooky but with upgraded avionics, navigation systems and a precision strike package that includes trainable 30mm and 105mm weapons,” according to the release.

The first Block 30 model will remain in a testing-only status for a year before it can deploy for battlefield operations, officials said.

The J-model also has improved turboprop engines, which reduce operational costs with better flight sustainability, the service has said.

It has the ability to launch 250-pound, GPS– or laser-guided small-diameter bombs (SDB). The aircraft is expected to carry AGM-114 Hellfire missiles, interchangeable with the SDBs on its wing pylons, AFSOC has said.

Palenske said last year that airmen have been waiting to see the aircraft in action.

“It's going to the most lethal, with the most loiter time, probably the most requested weapons system from ground forces in the history of warfare. That's my prediction,” he said.

The fourth-generation J is slated to replace the AC-130H/U/W models, with delivery of the final J- model sometime in 2021, according to the Air Force. The service plans to buy 37 of the aircraft.