The U.S. Air Force has selected two companies to make an extreme cold-weather boot for pilots as part of a long-term effort to better protect aviators from frostbite in emergencies. 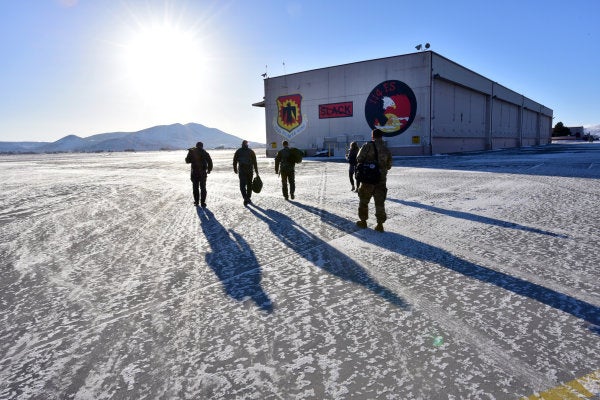 The U.S. Air Force has selected two companies to make an extreme cold-weather boot for pilots as part of a long-term effort to better protect aviators from frostbite in emergencies.

In August the service awarded a contract worth up to $4.75 million to be split between Propel LLC and the Belleville Boot Company for boots designed keep pilots' feet warm in temperatures as low as -20 Fahrenheit without the bulk of existing extreme cold weather boots, according to Debra McLean, acquisition program manager for Clothing & Textiles Domain at Air Force Life Cycle Management Command's Agile Combat Support/Human Systems Division.

The effort is intended to provide pilots with boots that are “much warmer than … existing” boots that are Air Force flight-certified and can perform for “more than two hours” of inactivity at -20, Mclean said.

In the long-term, the Air Force is working with the Naval Air Systems Command on a research-and-development effort to explore new boot technologies, such as artificial heat-generation, to provide cold-weather protection to pilots for six hours at -49 Fahrenheit in the same style of low-bulk boot, McLean said.

The current Propel version is a full-grain leather black boot designed after firefighter boots, said Claire King, president of Propel, adding that the production models will be coyote brown.

“Firefighter boots are super durable and designed to resist tons and tons of water, chemicals, abrasion and last a long time,” King said.

The Propel boots feature 900 grams of a special blend of insulation that includes Kevlar for extra warmth.

“The trick was to get 900 grams in there and also make it so that the boot is still fit for aviators, because the space for aviators is limited,” she said.

The Belleville boot features 600 grams of insulation plus Thermium, a material made by W.L. Gore, that allows the boots to perform down to -25 Fahrenheit when worn with other Air Force survival gear, according to Glen Becker, chief sales officer for Belleville Boot Company.

“The pilot may be injured and not able to move; if he is a downed pilot and he is … trying to evade or hide, he may not have a lot of movement,” Becker said.

The Belleville boot is rough-out leather in coyote, rather than full-grain leather like the Propel model.

“Some aviators prefer the rough-out leather and some prefer a full-grain smooth leather outer finish,” McClean said. “We leave the option open due to the large variety of aviation position types and responsibilities.”

In general, full-grain leather boots last longer than the rough-out leather, but they tend to cost more to produce, Mclean said.

“Some units don't want to pay for a boot that lasts eight years and some do, depending on the position and mission focus,” she said.

Under the deal, the Air Force could order a maximum quantity of 10,000 pairs over 27 months depending the service's need and available funding, McLean said.

Propel is also involved in the next phase of the effort that will look at different options for “improving this boot by adding active heat,” King said.

“I would say that is probably two to three years out … but the intent is to look at, can they extend the range of this boot to six hours at -49 degrees,” King said. “That is probably not feasible with passive materials. You need to create some type of active heat.”

There are commercially-available technologies that rely on battery-powered heat sources, but challenge is “batteries don't do well at -49 degrees,” King said.

“It's a very challenging problem to solve,” she said.

— Matthew Cox can be reached at matthew.cox@military.com.