After years of shrinking almost everything — from the size of its fleet of airplanes and fighter squadrons to its... 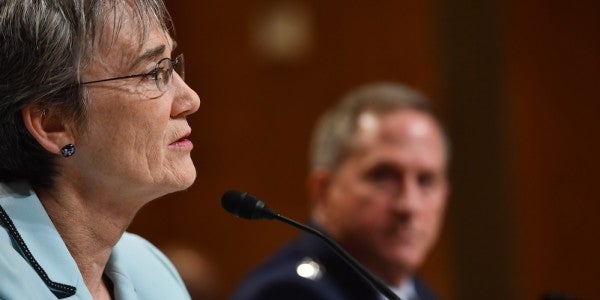 After years of shrinking almost everything — from the size of its fleet of airplanes and fighter squadrons to its active-duty forces — the Air Force is looking to expand to meet the increasingly dire threats around the globe, Secretary of the Air Force Heather Wilson said in an exclusive interview with the Dayton Daily News.

“We reduced our size and then ISIS reared its ugly head in Iraq and Syria and the Air Force did what it always does,” said Wilson, who talked to the newspaper after touring Wright-Patterson Air Force Base late last month. “We surged to the fight.”

But after the budget sequester in 2013, which significantly decreased the size of the Air Force, the service branch is now too small for what the nation expects it to do, said Wilson, a former Republican congresswoman from New Mexico who took over as the Air Force’s top civilian in May.

Comparison data back to the first Persian Gulf War shows just how much the Air Force has shrunk.

In 1991, at the height of the first Persian Gulf War against Iraq to liberate Kuwait, the Air Force, Air National Guard and Air Force Reserve combined counted 8,600 aircraft of all types and 134 fighter squadrons.

By last year, that number had dropped to 5,500 airplanes and 55 fighter squadrons, according to the Air Force.

Meanwhile, threats from groups like ISIS have continued to put America’s military to the test. The Air Force conducts 70 percent of the combat missions against the far-flung Islamic State, Wilson said.

Numbers alone don’t tell the whole story, according to Wilson, who said the Air Force must boost innovation to match the pace of technology breakthroughs from adversaries and increase readiness levels.

“Probably our biggest challenge in the Air Force today is our adversaries are innovating faster than we are,” she said.

“The first, second and third reasons are money, money, and money,” she said in an email. “The fourth reason is that Air Force leadership is in a credibility trough. … The Air Force has difficulty making its case not just within the Pentagon … but also across the river on Capitol Hill.”

In a column published last year, Eaglen wrote that Congress has imposed more oversight and offered less procurement funding for Air Force programs compared to other services such as the Navy.

U.S. Rep. Mike Turner, R-Dayton, has been critical of the level of funding for defense, saying there are shortfalls in training, equipment, and ammunition.

The latest defense bill tackles some of those problems, he said, but he noted: “The U.S. is facing some of the most complex and unpredictable threats in its history, including ISIS and North Korea. I have no doubt that with the proper funding our armed forces will combat these threats effectively.”

Senior defense analyst Loren B. Thompson of the Arlington, Va-based Lexington Institute, said the Air Force knows what it needs to buy over the next decade.

“The problem is that it will have to buy all of these items at the same time because modernization was neglected for 20 years after the Cold War,” he said in an email.

“The other problem is once you get more (than) 10 years out, it isn’t so clear which investments matter,” the defense industry consultant added. “Cyber weapons? Lasers? Hypersonic technology? There are many unknowns and limited budget resources, since the government is already borrowing over a billion dollars per day to make ends meet.”

David Deptula, dean of the Mitchell Institute of Aerospace Studies, said Congress needs to increase the Air Force budget or lower what is expected of it in terms of national security.

“Airmen need new systems at the speed of combat, not the pace of bureaucracy,” he said in an email.

The Air Force is still recovering from the 2013 budget sequester, Deptula said. Those cuts, which stemmed from the Budget Control Act of 2011, led to the grounding of more than 30 squadrons, including 16 combat squadrons or 20 percent of Air Force combat forces, he said.

“With this act, the Congress did more damage to our Air Force (than) what our most capable enemies could hope to achieve,” he wrote.

“How long do we really think tankers produced in the Eisenhower Administration will be viable?” he asked.

Todd Harrison, director of the Aerospace Security Project at the Center for Strategic and International Studies in Washington, said an anticipated defense strategy review by the Trump administration next year could chart a future path for the Air Force — and even change what the priorities are.

“What she (Wilson) sees as high demand for certain Air Force capabilities today could go up or down following that defense strategy review,” he said in an interview.

Harrison, also the CSIS director of the defense budget analysis, said the Air Force can help itself by reprioritizing where it spends money.

Too much, he said, is invested in tactical fighters such as the F-35 Lightning II and not enough on long-range bombers like the future B-21 Raider and space capabilities.

Although money for research to test weapons systems has risen, she said, the Air Force has not spent enough on early stage and applied research.

The Air Force Research Laboratory, headquartered at Wright-Patterson, has targeted hypersonics, directed-energy and autonomy in weapons, but the former university president and Air Force Academy graduate wants a broader look.

“If we’re focused really intensely there, we may be missing something else, so sometimes it’s important to step back and just do a bit of a survey and part of it will include what are our adversaries doing and what does that mean for us?” she said.

She wants to involve universities and U.S. industry in a concerted effort to bring more innovative solutions to the entire Air Force.

Eaglen, the American Enterprise Institute analyst, agrees adversaries are “absolutely out-innovating the U.S. military in many ways and across the services and domains.”

“I’d say the Air Force is the most behind, too, given their acute budget challenges the past 15 years,” she said.

“Today, almost none of the new military equipment coming online is revolutionary in design or technology; most is merely an upgraded version of something from the Cold War,” Eaglen said.

She added: “A half-century ago, the Pentagon had more than a dozen combat aircraft in development. Last year it had only the F-35 and a new bomber.”

Eaglen said China’s air-to-air missiles have a longer range than the Air Force’s, while Russia has taken the lead in electronic warfare.

“There is much to do to catch up, politically and financially and in innovation,” she said. “The Air Force will be hard-pressed to make up this lost ground but they must try.”

‘We’re wearing our people out’

Wilson said 0nly about 50 percent of Air Force squadrons can carry out missions assigned to them, a state of readiness she finds concerning.

“We’re wearing out our people and our readiness has gone down, our readiness for all kinds of fights,” she said. “We’ve got to restore the readiness of the force. That’s job one.”

A second priority is modernization, she said.

“The modernization needs the Air Force faces today are across the board,” she said. “It’s fighters. It’s bombers. It’s tankers. It’s space assets.

“We’ve got to be able to modernize quickly and more quickly than a thinking adversary.”