A man in an Air Force uniform, identified only by the YouTube username "Baptist Dave 1611" ranted in a recent video, calling gay people "sodomites," "vermin scum," and "roaches" among other slurs, according to Air Force Times, 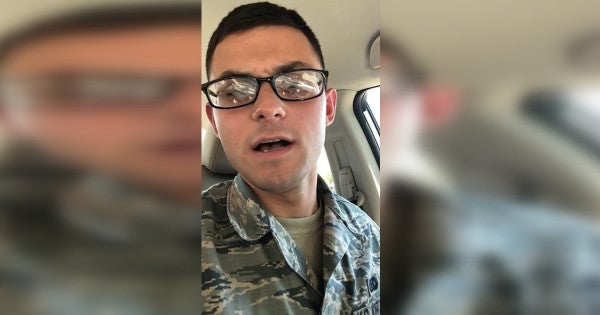 The Air Force is investigating an airman after he posted a video on YouTube rife with homophobic slurs and insults.

A man in an Air Force uniform, identified only by the YouTube username “Baptist Dave 1611” ranted in a recent video, calling gay people “sodomites,” “vermin scum,” and “roaches” among other slurs, according to Air Force Times, which first reported the story Wednesday.

“The specifics of the situation are being reviewed by the airman's command team,” said service spokesman Maj Nick Mercurio, confirming the incident. Mercurio did not provide any identifying details about the airman.

A screenshot from the video posted on Air Force Times showed the airman in his Airman Battle Uniform. The account has since been removed from the website.

“When you get these perverts on their own, they flee like cockroaches, like the roaches they are, the vermin scum, the pedophiles that they are,” the airman said in the video, as reported by Air Force Times.

In the video, “Baptist Dave” also said he was influenced by Grayson Fritts, the Tennessee Knox County Sheriff's Office detective who recently advocated for the arrest and execution of LGBTQ people. Fritts is also a pastor of All Scripture Baptist Church in Knoxville. During a sermon on June 2, Fritts said LGBTQ individuals “are worthy of death.” The video, originally released by the church, went viral on social media.

“The Air Force considers diversity to be one of our greatest assets,” Mercurio said in a statement to Military.com. “Therefore, airmen are expected to treat one another with dignity and respect. We do not tolerate behavior that is contrary to those values.”

Mercurio cited Air Force Instruction 1-1 which outlines the service's culture standards that all airmen must comply with.

“Our core values demand that Airmen treat others with genuine dignity, fairness, and respect at all times,” the AFI states under its code of conduct.

“Each Airman is entitled to fair, scrupulous, and unbiased treatment, and each Airman has the obligation to care for, teach, and lead others. We must also maintain loyalty to the Air Force's core values and standards and maintain professionalism and respect for others regardless of race, color, religion, gender, national origin, age, disability, or sexual orientation. This respect for others not only involves personal interaction, but also extends to communications and interactions in social media and cyberspace,” it says.

Last year, the Pentagon introduced a new policy to deter misconduct and harassment among service members, defining harassment to include offensive jokes, stereotyping, violence, and discrimination.

Under direction from then-Defense Secretary Jim Mattis, the Defense Department in February unveiled DoD Instruction 1020.03, Harassment Prevention And Response in the Armed Forces, which immediately superseded any past department policies on sexual harassment and unacceptable behavior for service members.

The 23-page comprehensive policy updates the department's definitions of harassment and proper response to attacks on individuals via social media, as well as misconduct on bases.

DoD says that harassment may include “offensive jokes, epithets, ridicule or mockery, insults or put-downs, displays of offensive objects or imagery, stereotyping, intimidating acts, veiled threats of violence, threatening or provoking remarks, racial or other slurs, derogatory remarks about a person's accent, or displays of racially offensive symbols.”

Discriminatory harassment — which is based on race, color, religion, sex (including gender identity), national origin, or sexual orientation — is addressed under the policy.

The reported YouTube video marks the latest in a string of incidents under investigation by the Air Force involving alleged inappropriate conduct by airmen.

In April, the service said it was looking into Master Sgt. Cory Reeves of the 50th Space Wing at Schriever Air Force Base Colorado after the group Colorado Springs Anti-Fascists accused Reeves of being a member of white nationalist organization Identity Evropa in an online post.

Weeks earlier, the Office of Special Investigations at the 39th Air Base Wing at Incirlik Air Base, Turkey, began investigating Airman First Class Dannion Phillips, who was identified in a Huffington Post report as being involved with Identity Evropa.

The Air Force did not have additional information on the status of these investigations by press time.This article originally appeared on Military.com