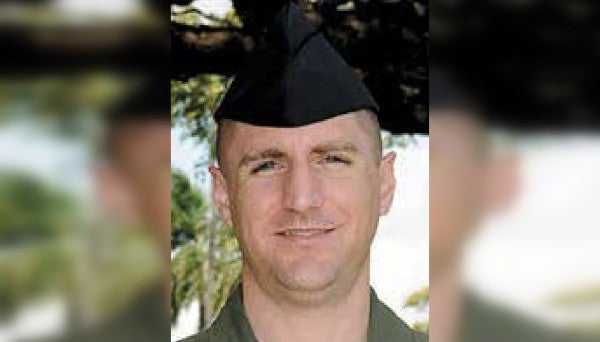 Officials at Schriever Air Force Base are investigating whether a master sergeant stationed there participated in a white nationalist group after his identity was exposed by Colorado Springs activists.

The Colorado Springs Anti-Fascists group first identified Master Sgt. Cory Reeves as a member of the Colorado branch of Identity Evropa earlier this month. Cheri Dragos-Pritchard, a base spokeswoman, confirmed officials there knew of the allegations and are investigating Reeves's ties.

Dragos-Pritchard referred questions Tuesday about the investigation to the Air Force's national media team. Major Nick Mercurio, an Air Force spokesman, said he had “no information for you” about whether the investigation was complete, what it found or whether Reeves had been disciplined.

When reached Tuesday by his phone number at the base, Reeves said he had no comment on the investigation. He hung up the phone when a reporter asked if he was a member of Identity Evropa. He did not pick up a subsequent phone call or return a voicemail left on his cell phone.

Identity Evropa — which was recently rebranded — was one of the most visible supremacist groups in Colorado and best known for their blue and white stickers they place on college campuses and street signs. In leaked chat messages, Reeves positioned himself as a leader of the local chapter.

Identity Evropa was a white nationalist group that aimed to preserve white European and American culture from perceived threats from Muslims, immigrants and non-white people in the United States. It opposed “ethnic diversity” and wanted white Europeans to maintain super majorities in their “homelands.”

The Southern Poverty Law Center identified the group as an extremist white nationalist group and the Anti-Defamation League identified it as a white supremacist group. Members of Identity Evropa participated in the 2017 white supremacist rally in Charlottesville, Va., where a woman protesting the rally was ran over and killed.

The group's founder, Nathan Damigo, was a member of the U.S. Marines Corps, according to the ADL.

Patrick Casey, the group's most recent leader, announced in March that Identity Evropa was being “retired.” Shortly after, he launched a new group called the American Identity Movement, which activists have said is simply a rebranding of Identity Evropa.

Identity Evropa's end came a few days after a nonprofit group called Unicorn Riot leaked the group's internal messages. News organizations across the country used the leaks to track activity by Identity Evropa and other extremist groups in their communities.

Reeves posted frequently in the chats, including a selfie of himself skiing atop Imperial Summit outside Breckenridge in February, the logs showed. The selfie matches a 2016 photo of Reeves printed in a weekly newspaper published by the joint Air Force and Navy base in Hawaii where Reeves previously worked.

Under his username in the chat boards, Reeves posted photos of himself and others placing Identity Evropa stickers or holding the group's banner in locations across the Front Range. His photos were taken in Breckenridge, Estes Park, Golden, Colorado Springs, Manitou Springs, Greeley, the Cherry Creek Mall, Civic Center Park and inside the Denver International Airport. He was also one of two men featured in a Youtube video purporting to show the men painting a mural with the group's logo underneath a Denver overpass.

The video has been taken down.

In the chat rooms, he pushed others to sign up for a November meetup in Denver called “Defend the Rockies”

“We have a strong sense of local identity here in Colorado,” he wrote in September after others asked about a spate of recent activity. “I think it adds to the urgency and high-energy.”

He also noted in the chats in December 2017 that he was a dues-paying member of the Oath Keepers — a radical anti-government group — but couldn't act more publicly because he is active-duty military.

The military is a particularly fertile ground for white supremacists and other far-right extremists to recruit, said Carter Smith, a professor at Middle Tennessee State University who studies gangs and criminal activity in the military and is a former criminal investigator in the Army.

Those skills are appealing to white nationalists because the groups feel like they're fighting a war against modern culture, he said. The groups also recruit within the military because it is largely comprised men in their 20s and 30s who are still forming their opinions and beliefs.

In February, a Coast Guard lieutenant who identified as a white nationalist was arrested for allegedly plotting to kill journalists and Democratic politicians. The Huffington Post last month used the Unicorn Riot leaked chats to identify seven military members as part of Identity Evropa.

A 2017 poll by the Military Times found that nearly a quarter of troops said they had seen examples of white nationalism in their ranks.

Historically, the Air Force has done a better job about searching for extremists in its ranks than the other branches, Smith said. But the military has not done enough to root out the problem, he said.

“Do I think they will always catch it? No. I don't think they're looking that hard,” he said.

WATCH NEXT: How White Supremacists Target Veterans For Recruitment