Russia said on Thursday it was alarmed by a trip to a Norwegian outpost in the Arctic by a U.S. Air Force unit and urged Oslo to refrain from what it said were de-stabilizing moves in the strategic region 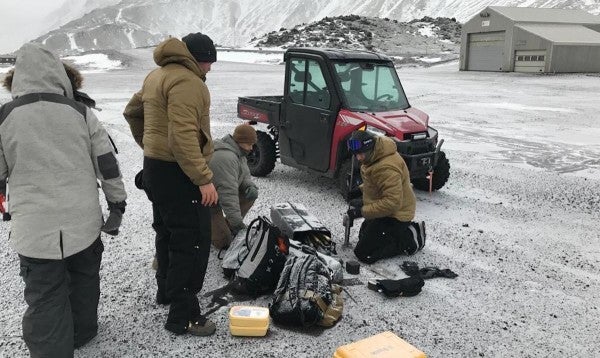 MOSCOW/OSLO (Reuters) – Russia said on Thursday it was alarmed by a trip to a Norwegian outpost in the Arctic by a U.S. Air Force unit and urged Oslo to refrain from what it said were de-stabilizing moves in the strategic region.

A squadron of U.S. Air Force staff visited Norway's air base on the island of Jan Mayen in the North Atlantic in November to test the airfield and to see whether U.S. C-130J Super Hercules military transport planes can land there.

Tensions have been rising in the energy-producing Arctic as climate change has opened up the region, and Russia has built up its own military presence there and touted the potential of the Northern Sea Route across its northern flank.

Jan Mayen is north of Iceland and sits astride sea lanes between the Arctic and Atlantic oceans.(Google Maps)

Moscow has repeatedly raised concerns over NATO-member Norway's military spending, its moves to develop its military infrastructure and the deployment of foreign military personnel in the country.

Commenting on the U.S. visit to the island, the Russian Foreign Ministry told Reuters Moscow believed Norway's recent military activity was ultimately aimed at Russia and that such actions destabilize the region.

“…the sheer fact of the possible presence of the U.S. Air Force on the island, albeit occasional, is alarming,” it said.

“We hope Oslo will be responsible and far-sighted in building its policy in the north and will refrain from actions that undermine regional stability and damage bilateral relations,” the ministry said.

Earlier this month, Moscow accused Norway of restricting its activities on the archipelago of Svalbard, a remote chain of islands in the Arctic, and said it wanted talks with Oslo to have the issue resolved.

Norwegian Defense Minister Frank Bakke-Jensen has played down the implications of the visit on the security situation in the north and Norway's relationship with Russia.

“Individual transport flights to Jan Mayen with planes from allied countries will not impact the security policy picture in the north,” he told parliament.

He said a request to help with transport flights to Jan Mayen was sent to allied countries in 2019 as Norway's air force was stretched.

He said planes from military forces from Austria, Sweden, Denmark and France had flown to Jan Mayen between 2017 and 2019.

“Jan Mayen will not be used for military activities,” he said.