The 21 passengers on board the so-called STEAM flight were local middle school students on a flight to promote women in aviation, said Lt. Brandon Hanner, spokesman with the 6th Air Refueling Wing 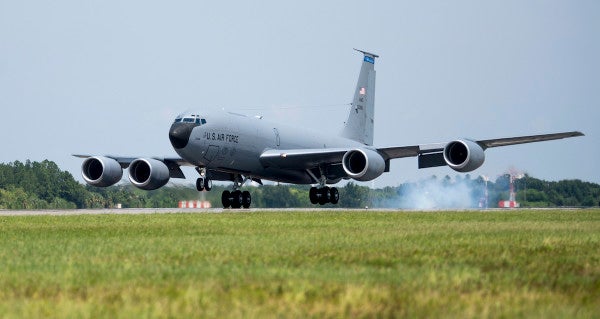 TAMPA — A fuel tanker jet serving as a flying classroom made an emergency landing at MacDill Air Force Base Thursday.

The 21 passengers on board the so-called STEAM flight were local middle school students on a flight to promote women in aviation, said Lt. Brandon Hanner, spokesman with the 6th Air Refueling Wing. All of the girls exited the plane safely.

The students were members of coding and robotics clubs at Coleman Middle School and McLane Middle School. As is typical in emergency landings, they were evaluated by a military doctor before leaving the base. Fire and security units also were standing by as the plane landed.

The decision was made to land minutes after the plane took off when the crew noticed “a potential issue” in the boom pod area, according to a post on the MacDill Facebook page at about 12:45 p.m. The boom pod is used for in-flight refueling of other aircraft, the mission of the KC-135s.

The plane had been scheduled to conduct a refueling with the girls on board, Hanner said.

MacDill conducts STEAM Day once a year for students from Hillsborough County Public Schools to fuel interest in science, technology, engineering, arts and math. This year's event is scheduled for April 22. Last year, some 2,300 students attended.

The KC-135 that made the emergency landing is currently being inspected and more details will be available once complete. No future STEAM flights are currently scheduled.

MacDill will reschedule the flight if the students' parents and schools want to, Hanner said.